The Paths We Walk

A Documentary Photo exhibition called “The Paths We Walk” was recently inaugurated in New Delhi. 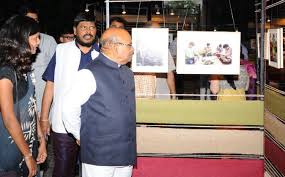 The National Trust is a statutory body under the Ministry of Social Justice & Empowerment, Government of India and set up under the National Trust for the Welfare of Persons with Autism, Cerebral Palsy, Mental Retardation & Multiple Disabilities Act.

In the light of alleged irregularities, the government has reiterated that GeM is the most transparent, accountable and efficient public procurement portal and has already resulted in savings of crores of Rupees to the Government.

Government e-Marketplace (GeM) aims to transform the way in which procurement of goods and services is done by the Government Ministries/Departments, PSUs, autonomous bodies etc.

The Centre has proposed issuing “Unique Identification Number Sequences” for cows and their progeny to protect them from cattle smuggling. A government committee has also iterated the same. The plan is the brainchild of the Union Agriculture Ministry for “tamper-proof identification of cattle using polyurethene tags with a Unique Identification Number Sequence.”

Cattle smuggling has become a “by-product” of the dairy industry. Stray, “retired” and abandoned cattle face high risk of falling into smugglers’ hands.

The Centre is set to launch a scheme for students from higher educational institutions to volunteer to offer innovative, original and practical solutions to problems facing the country and get rewarded for their efforts.

Referring to the setback suffered by the CBI in its efforts to get Kim Davy — a Danish citizen and prime accused in the Purulia arms drop case of 1995 — extradited from Denmark, the Supreme Court has observed that India may be finding it tough to secure extraditions because there is a fear within the international community that the accused persons would be subject to torture here.

A Danish court had rejected the plea on the ground that he would risk “torture or other inhuman treatment” in India.

Considering it a matter of both Article 21 (fundamental right to life and dignity) and of international reputation, the court has asked the government to consider promulgating a standalone, comprehensive law to define and punish torture as an instrument of “human degradation” by state authorities. Such a law is in the national interest.

India has signed the UN Convention against torture way back in 1997. But, it has still not ratified it. The Convention defines torture as a criminal offence.

A bill was also proposed in this regard. But, no action has been taken on the Prevention of Torture Bill 2010 even six years after it was passed by the Lok Sabha on May 6, 2010 and recommended by a Select Committee of the Rajya Sabha of which he had been Chairman.

The centre contends some States were not in favour of such a law and the Indian Penal Code and the Criminal Procedure Code were more than sufficient.

Hindi being ‘promoted’ as per Act: Rijiju

Faced with criticism that the Central government is unfairly imposing Hindi on non-Hindi-speaking States, the government has iterated that it was only promoting the language as per an Act of Parliament.

In May 2015, the government had issued an order that as per the Official Languages Act, 1963, all government files would have to be issued bilingually, in Hindi and English.

Important recommendations made by the committee include:

Article 351 says it shall be the duty of the Union to promote the spread of the Hindi language, to develop it so that it may serve as a medium of expression for all the elements of the composite culture of India and to secure its enrichment by assimilating without interfering with its genius, the forms, style and expressions used in Hindustani and in the other languages of India specified in the Eighth Schedule, and by drawing, wherever necessary or desirable, for its vocabulary, primarily on Sanskrit and secondarily on other languages.

Activist Prafulla Samantara is one of the six winners of the Goldman Environmental Prize for 2017. He is being honoured for his historic 12-year legal battle that affirmed the indigenous Dongria Kondhs’ land rights and protected the Niyamgiri Hills from a massive, open-pit aluminum ore mine. The annual prize awarded by the Goldman Environmental Foundation honours grassroots environmentalists, who risk their lives to protect the environment and empower those who have the most to lose from industrial projects that threaten their traditional livelihoods.

‘Child artistes can work only for 5 hours a day’

The Labour Ministry has proposed the draft Child Labour (Prohibition and Regulation) Amendment Rules, 2017 to fix the working conditions for child artistes and for employing children in family enterprises.

The government had brought a new law to govern child labour, known as the Child Labour (Prohibition and Regulation) Amendment Act, 2016, which put a blanket ban on employment of children below 14 years of age. However, it had made two exceptions in favour of child labour: children could work as child artistes (in the entertainment sector), and could “help” in their family enterprises.

Appointments Committee of the Cabinet:

Ghana, Kenya and Malawi to pilot GSK malaria vaccine from 2018: