In its first official forecast of the season, the IMD expects India to have normal monsoons this year. Given the deficient pre-monsoon rains over large parts of Karnataka, Tamil Nadu and Kerala, good rains are essential this year to trap enough soil moisture for a healthy kharif crop, which is vital to keep inflation down and rural consumption up.

The India Meteorological Department (IMD), also referred to as the Met Department, is an agency of the Ministry of Earth Sciences of the Government of India.

The Australian government has scrapped the Australian “457” visa programme that allowed Australian companies to hire foreign workers in a number of skilled jobs for a period up to four years. The programme will be replaced with a more stringent system, making it difficult to hire non-Australian citizens. This is aimed at giving priority for Australian workers for Australian jobs. How would this affect Indians?

The move is expected to impact Indian IT and other companies. India provides the highest number of temporary skilled workers to Australia of any country; eight out of the top 10 occupations for Indian 457 visa holders (as at December 2016) were IT professionals. According to the Australian Department of Immigration and Border Protection, Indians constituted 76% of the total ‘457’ visas issued in the three IT streams, and 57% of permanent migrant visas issued in the skilled stream of workers last year.

The Centre is studying the implications of the Australian government’s decision to scrap a visa programme that benefited Indians. It has warned that the move could have an impact on negotiations on the free trade agreement — Comprehensive Economic Cooperation Agreements (CECA) — between both countries.

The Railway Ministry has sought compensation for operating railway lines of strategic and national importance — a practice discontinued following the merger of Railway and Union Budgets. 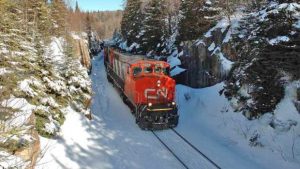 However, recently, two Parliamentary bodies — Standing Committee on Railways and Estimates Committee — recommended that the Finance Ministry should continue compensating the Railways for losses in operating strategic lines for the following reasons:

The Reserve Bank of India (RBI) has raised a red flag over banks’ loans to telecom players and asked the lenders to increase their standard asset provisioning more than what is prescribed so that they can built ‘necessary resilience.’

Telecom players are reeling under a huge debt — estimated to be about ₹4.2 lakh crore — amid a tariff war and a consolidation among some of the players. The telecom sector is reporting stressed financial conditions, and presently interest coverage ratio for the sector is less than one.

Interest coverage ratio of less than one means the company’s EBIDTA (Earnings Before Interest, Taxes, Depreciation and Amortization) is not sufficient to repay interest, let alone principal.

Debt accumulation and potential NPAs have been on the rise across a range of sectors including telecom. Alarming debt levels in the backdrop of recent declining revenues increase debt serviceability risks for the telecom sector. Five sectors, including telecom, contribute to 61% of the stress in the banking system.

The Channakeshava temple in Belur — a masterpiece of Hoysala architecture — turned 900 this year. Belur, along with Halebid, is proposed as a UNESCO heritage site.

The temple, constructed by Vishnuvardhana of the Hoysala dynasty, is a monument recognised by the ASI. Considered to be the first temple of Hoysala style, it was built between 1106 and 1117. The temple is regarded a marvel of architecture in typical Hoysala style. It commemorates the king’s victory in 1104.

Paper 2 Topic: Indian culture will cover the salient aspects of Art Forms, Literature and Architecture from ancient to modern times.

The Battle of Adyar: distant drum About Battle of Adyar:

The Battle of Adyar took place on 24 October 1746. The battle was between the French East India Company men and Nawab of Arcot forces over the St. George Fort, which was held by the French. It was part of the First Carnatic War between the English and the French.

What is the H-1B program, and why is the president focused on it?

The H-1B program grants 65,000 work visas a year to foreigners, with 20,000 more visas granted to foreigners with advanced degrees and an unlimited number of extra visas available for universities, teaching hospitals and other nonprofit organizations. The program is aimed at highly skilled workers, and most of the visas are awarded to technology companies, although other specialty industries such as fashion also use the visas.

How are the visas allocated?

Because there are more applicants than visas, the visas are awarded by lottery. Each visa is good for three years and can be renewed for three more years. Immigrants who are applying for a permanent residency visa, known as a green card, can typically stay longer while waiting for approval.

Buzz over photograph of ‘Indian wolf’ in Sunderbans: