IMD trains states to deal with heatwaves as temperatures rise

Anticipating a structural shift in the country’s weather, the India Meteorological Department (IMD) is training state governments to improve their mitigation preparedness to cope with the persistent heatwaves. 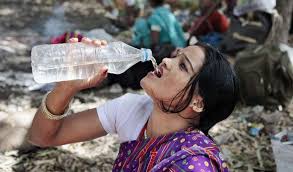 IMD has tied up with state disaster management commissioners and health secretaries to formulate plans in the face of large casualties from heatwave conditions. The National Disaster Management Authority (NDMA), on its part, has prepared a standard operating procedure template and a sequence of actions to be triggered during a severe heatwave.

Temperatures across India have been rising on an average of 0.7 degrees every decade, according to IMD, with 2016 the hottest so far.

While there are nuances and region-specific differences, the IMD broadly defines a heat wave as when a place’s temperature is 5-6 degrees above normal.

Who will be affected?

The people most affected by heatwaves are the homeless, farmers, policemen, construction workers, postmen and vegetable vendors—i.e, those who live or work outdoors. Severe heatwave conditions in the past have resulted in school and college vacations being extended.

The health impacts of Heat Waves typically involve dehydration, heat cramps, heat exhaustion and/or heat stroke. The signs and symptoms are as follows:

A new Road Accident Data Recording and Reporting Format has been rolled out by the Ministry of Road Transport and Highways (MoRTH) with a view to moving closer towards an accurate, consistent, and objective road accident database.

The comprehensive recording and reporting format, to be executed by all States and Union Territories, is aimed at bringing out the underlying real cause of the road accident so that stakeholders can take corrective and preventive steps.

About the new format:

Chief secretaries and State Police Chiefs have been asked to take steps to furnish the road accident details in the new format from this calendar year.

India becomes Net Exporter of Electricity for the first Time Ever since the cross border trade of electricity started in mid-Eighties, India has been importing power from Bhutan and marginally exporting to Nepal in radial mode at 33 kV and 132 kV from Bihar and Uttar Pradesh. On an average Bhutan has been supplying around 5,000- 5500 Million units to India.

The Central Electricity Authority of India (CEA) is a statutory organisation constituted under section 3(1) of Electricity Supply Act 1948, which has been superseded by section 70(1) of the Electricity Act 2003. The CEA advises the government on matters relating to the National Electricity Policy and formulates short-term and perspective plans for the development of electricity systems.

Southwest China’s Chongqing Municipality, the most populous and also the largest direct-controlled municipality, has announced a new regulation to punish unauthorised Internet connections outside China’s Great Firewall (GF) using VPNs by individuals in the region. What is China’s Great Firewall?

There are 700 million Internet users in China, more than half of its population, and Internet news circulated by social media platforms like Weibo has become more popular than the state-controlled mainstream media making the ruling Communist Party of China (CPC) to beef up controls on the Internet to ensure that its monopoly over power is not challenged.

While VPNs are used widely by diplomatic and foreign media in China to access world wide Internet, the special applications designed to beat the GF being marketed by several Internet firms abroad are becoming popular among Chinese too.

In a first, the Comptroller and Auditor General of India (CAG) is doing a comprehensive performance audit of the country’s food regulator, FSSAI.

The audit of the Food Safety and Standards Authority of India (FSSAI) comes against the backdrop of the food regulator’s controversial decision to ban manufacturing and sales of Maggi noodles—a popular snack sold by Swiss company Nestle in India—in 2015.

After the crackdown on Maggi, questions were raised on FSSAI’s capabilities and operations including things like product approval process, one of the primary things the regulator used to do. The Bombay high court in July 2015 asked FSSAI to justify its actions against the noodle brand.

An audit like this will eventually help the organization enhance its performance. It would find out the loopholes, highlight what the regulator should do to cover up those.

The World Food Programme (WFP) is the food assistance branch of the United Nations and the world’s largest humanitarian organization addressing hunger and promoting food security. The WFP strives to eradicate hunger and malnutrition, with the ultimate goal in mind of eliminating the need for food aid itself.