Hindu New Year is being welcomed in different parts of the country today with traditional festivities and celebrations. The government recently informed the Lok Sabha that so far against the target of 14 crore cards distribution, 6 crore cards have been distributed and remaining cards are under printing. About the Soil Health Card Scheme:

What are soil health cards? In this regard, the Centre can issue a notification to cover any class of establishments with a lower contributory rate under the Employees’ Provident Fund and Miscellaneous Provisions Act, 1952.

The Employees’ Provident Fund Organisation, a statutory body, is one of the largest social security organizations in India in terms of volume of financial transactions undertaken and number of covered beneficiaries. It works under the overall aegis of the Ministry of Labour and Employment.

The particles that cover the surface of Saturn’s largest moon, Titan, are “electrically charged”, show results of an experiment. 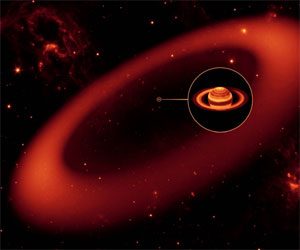 This discovery may help explain an odd phenomenon — prevailing winds on Titan blow from east to west across the moon’s surface, but sandy dunes nearly 300 feet tall seem to form in the opposite direction.

Experiments suggest the particles that cover the surface of Saturn’s moon, Titan, are ‘electrically charged.’ When the wind blows hard enough, Titan’s non-silicate granules get kicked up and start to hop in a motion. As they collide, they become frictionally charged, like a balloon rubbing against your hair, and clump together in a way not observed for sand dune grains on Earth — they become resistant to further motion.

They maintain that charge for days or months at a time and attach to other hydrocarbon substances, much like packing peanuts used in shipping boxes here on Earth.

According to the Indian Meteorological Department (IMD), in line with rising temperatures across the globe, all India mean temperatures have risen nearly 0.60 degree Celsius over the last 110 years. Further IMD studies have highlighted that extreme events like heat waves have risen in the last 30 years. As per the fifth Assessment Report (AR5) of Intergovernmental Panel on Climate Change (IPCC) published in 2014, globally averaged combined land and ocean surface temperature has risen by 0.85 degree Celsius over the period 1880 to 2012.

Many extreme weather and climate events like heat waves, heavy precipitation and tropical cyclones have been observed since about 1950.

The government has launched the National Action Plan on Climate Change (NAPCC) in June, 2008 to deal with climate change and related issues.

Planetary waves, first found on Earth, are discovered on Sun

The same kind of large-scale planetary waves that meander through the atmosphere high above Earth’s surface may also exist on the Sun, according to a new study led by a scientist at the National Center for Atmospheric Research (NCAR). Scientists lacked the tools to distinguish this wave pattern until recently. It is because, unlike Earth, which is scrutinized at numerous angles by satellites in space, scientists historically have been able to study the Sun from only one viewpoint: as seen from the direction of Earth.

But for a brief period, from 2011 to 2014, scientists had the unprecedented opportunity to see the Sun’s entire atmosphere at once. During that time, observations from NASA’s Solar Dynamics Observatory (SDO), which sits between the Sun and the Earth, were supplemented by measurements from NASA’s Solar Terrestrial Relations Observatory (STEREO) mission, which included two spacecraft orbiting the Sun.

Collectively, the three observatories provided a 360-degree view of the Sun until contact was lost with one of the STEREO spacecraft in 2014. The data collected during the window of full solar coverage was studied to see if the large-scale wave patterns might emerge.

Haryana government to set up Centre for flowers in Jhajjar to promote floriculture:

A Centre of Excellence for Flowers is being set up with the assistance of Netherlands in district Jhajjar of Haryana to encourage the farmers to take up floriculture.