1) How is climate change affecting the polar or Arctic climate? Explain. (200 Words) A small temperature shift can have enormous implications

Even an increase of 2°C could be too much. A slight shift in temperature, bringing averages above the freezing point, will completely alter the character of the region.

Examining the record of past climatic conditions indicates that the amount, speed, and pattern of warming experienced in recent decades are indeed unusual and are characteristic of the human-caused increase in greenhouse gases. Both natural and human-caused factors can influence the climate. Among the natural factors that can have significant effects lasting years to decades are variations in solar output, major volcanic eruptions, and natural, sometimes cyclic, interactions between the atmosphere and oceans. Several important natural modes of variability that especially affect the Arctic have been identified, including the Arctic Oscillation, the Pacific Decadal Oscillation, and the North Atlantic Oscillation. Each of these can affect the regional patterns of such features as the intensity and tracks of storm systems, the direction of the prevailing winds, the amount of snow, and the extent of sea ice. In addition to changing long-term average climatic conditions, human-induced changes in the climate may also affect the intensity, patterns, and features of these natural variations.

2) Write a critical note on the resources available in the Arctic region and geopolitics associated with these resources. (200 Words)

In Russian Arctic there are a number of mines where nickel, copper, tin, uranium and phosphate are produced. One of the biggest nickel-mining and producing centers is the Norilsk Nickel plant.

Biological resources are similarly bountiful in the Arctic region. An estimated one-fifth of freshwater and several of the world’s largest rivers are found there. The region encompasses one of the last and most extensive, continuous wilderness areas on Earth, and it is home to hundreds of endemic species of plants and animals. Millions of migratory birds from around the globe breed and live seasonally in the Arctic and a variety of marine mammals inhabit the regional ocean waters. Fish such as salmon, cod, and pollock abound in Arctic and sub-Arctic waters, supporting valuable commercial fisheries. Some two dozen major herds of reindeer and caribou, important resources for indigenous peoples, migrate across high northern landscapes. In sum, humans gain much from the Arctic’s living resources, and the region is uniquely important to global biodiversity.

Geo-politics associated with these resources-

Strengthened legal and regulatory frameworks in the Arctic will be necessary to attract international investment and development. The debate on the future of Arctic governance centres on whether to create new or use existing multinational frameworks.

3) Critically analyse the nature of India’s spending on health. (200 Words)

The Centre recently cleared the long-awaited National Health Policy 2017, which promises to increase public health spending to 2.5% of GDP in a time-bound manner and guarantees health care services to all Indian citizens still The World Health Report of 2016 recently released by the World Health Organization (WHO) shows that despite being placed roughly in the middle of the South-East Asian Region (SEAR)—India is one of the worst performing regions in health.

Health sector and spending has assumed importance as:-

However the nature of health spending is coming under critical scrutiny due to following aspects:- 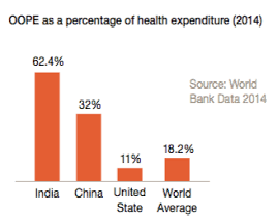 Exploring Alternative financing sources: Following mechanisms may be considered for expanding the existing pool of financial allocations for health in our country:

4) Discuss the humanitarian dimension of the fishermen issue between India and Sri Lanka. In your opinion,  what are the best available options that could help resolve this issue between two neighbours? (200 Words) 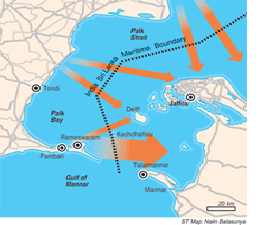 The Palk straight has always been a bone of contention between India and Sri Lanka due to the issue of fishermen frequently crossing the maritime boundaries for bottom trawling fishing expeditions.

Q)Why we often hear about arrest / shooting of Indian fishermen and not Sri Lankan?

Though both Indian and Sri Lankan fishermen are known for entering into each other’s waters, yet the cases of arrest of Sri Lankan fishermen by Indian authorities are comparatively less. This is mainly because the Sri Lankan fishermen mostly fish in the high seas by using multi-day crafts. On the other hand, due to the dearth of multi-day fishing capability, Indian fishermen cannot shift their fishing effort from the Palk Bay area to the offshore areas of the Indian waters or way beyond the continental shelf.

Q)How fishermen issue with Sri Lanka is different from those with Pakistan or Bangladesh? Wherever sovereign coasts are in proximity, straying of fishermen is normal. But the fishermen issue between India and Sri Lanka is different from other neighbors. This is because the coasts of both countries are too close and Territorial Maritime waters of each country in some areas strays into the other are if 12 nautical mile criteria is strictly applied

Q)Role of Katchatheevu  island:- One of the major reasons complicating the issue is of Katchatheevu Island. India ceded the uninhabited island to its southern neighbor in 1974 under a conditional accord. In 2009, the Sri Lankan government declared Katchatheevu island as sacred land owing to a Catholic shrine’s presence on the piece of land.
HUMANITARIAN SIDE OF THE ISSUE:-

The issue of fishermen straying in each other’s territorial waters has come as a potential irritant in the otherwise generally good bilateral relations between India and Sri Lanka. Solution from below’ has greater chances of success than a ‘solution imposed from above’ by the governments. The solution cannot be extra deployment of Navy and Coast Guard. The underlying cause needs to be addressed. Detentions of fishermen on both sides running for years seems unnecessary. Sri Lankan authorities reportedly feel that detentions have reduced poaching to a great extent but that has not reduced the intensity of the situation. Both countries need to put a stop to it for finding a peaceful amicable solution. As recently said by Bangladesh Prime Minister Sheikh Hasina that the most important issue of South Asian region is poverty and it can be tackled with cooperation and sharing of scarce resources of region peacefully.

5) Recently Pakistan launched, despite much opposition  by various groups,  conducting of its population census after a gap of 19 years. Why was there an opposition? Discuss the significance of this census for Pakistan and also for non-muslim communities living in Pakistan. (200 Words0

Pakistan’s decision to launch a national census, after much delay, is a welcome step that would allow it to formulate realistic policies to address the challenges it faces. The Census in Pakistan, is a decennial census and a descriptive count of Pakistan’s population on Census Day, and of their dwellings, conducted and supervised by the Bureau of Statistics of the Ministry of Finance and Statistics. The 2017 Census in Pakistan marks the first census to take place in Pakistan since 1998. The next census is scheduled for 2027.

It is not difficult to see why traditional political parties and ethnic leaders oppose the data-gathering. Since the last census was conducted in 1998 by the second Sharif government, Pakistan has undergone major changes. The opposition to census is on following grounds:-

Pakistan is going through a relatively stable phase, economically and politically. The Sharif government doesn’t face any existential challenge and is set to become the second elected government in Pakistan’s history to finish its full term next year. Economic growth has also picked up. This allows Mr. Sharif to take some risks for long-term reforms. He should stay the course towards working out a realistic reallocation of resources and parliamentary seats to the provinces based on the new census data.  All political parties should be prepared to let go and work with new ground realities. The provincial governments should participate in ensuring a credible consensus. They are now stakeholders. Blame game should be avoided at all costs. This census should be transparent and its data should be released immediately and be available to research communities to shun doubts and confusions.

Conflicts between the Nepali and Indian side over construction activities, and SSB interventions, are reported routinely. Nepal and India share an open border of around 1,750 km. Demographic similarities, marriages between the people of the two nations and the free movement of persons are, however, not without their problems. Comparison and contrast:-

Nevertheless, two or three incidents may not change the strategic calculus in the region. It is time for India to address the Nepali social, economic and political concerns at least from china prism. Nepal is also a buffer for India to counter China’s aggression. More the stronger relations more the strategic weight to India in South Asia. It is also very easy to address Nepali concerns than dealing with Pakistan-China axis.

7) Do you think Russia’s recent maneuvers in the Afghanistan and Pakistan affairs would help it strategically in the region? Critically comment on the nature of its clout in the South Asian region and its impact on India’s stature in the region. (200 Words)

RUSSIAN CLOUT IN THE SOUTH ASIA –

In south Asia Russia’s presence is not that strong. Its vision in the region is marked by short-term interests. Neither does it have the necessary economic prowess to undertake any long-term adventure.
It’s unlikely to affect Indian stature in any significant way. Russia’s trade with India, Pakistan and Iran has actually gone down .India has undertaken several infrastructure development programs in Afghanistan and commands SOFT POWER in the region. something that can not be subdued by Russia. Pakistan on the other hand is aid hungry. It makes little difference whether comes from Russia, china or USA. Russia has negligible presence in the region on the other hand India recently has expanded its presence dramatically e.g. Chahbahar port in Iran.

Afghanistan, Pakistan, and India all have good reasons to reinforce ties to Russia, though each is differently placed to weather the potential consequences. But even if it had the resources, Moscow’s room for maneuver would be very limited. NATO is not going to pull out of Afghanistan entirely, China looms far larger in Pakistan and in the region more generally, and Russia’s Afghanistan-Pakistan gyrations have hardly endeared it to New Delhi.