Insights into Editorial: The curious case of Justice Karnan and its implications for higher judiciary

Recently, for the first time ever, a sitting high court judge was hauled up before the Supreme Court to answer for a contempt charge. A seven-judge bench of the top court issued contempt notice to Justice CS Karnan of the Calcutta high court.

The warrant was issued against the Judge for his failure to appear before the Bench hearing suo-motu contempt proceedings against him, for openly accusing Judges of corruption. The Court had taken into account the letters circulated by the Judge earlier this year, making allegations against Supreme Court and High Court judges.

Significance of this issue:

A seven-judge bench for a contempt hearing is unprecedented — it is usually handled by two- or three-judge benches, and very rarely by a five-judge bench — and showed how seriously the Supreme Court was taking this case. It suggests that the court has reached the end of its tether while handling Justice Karnan, a judge who has had frequent run-ins with fellow judges in the Madras high court (where he was originally elevated) and the Calcutta high court, apart from the Supreme Court itself.

A pattern of Judicial indiscipline:

To say that Karnan’s acts over the last few years have been judicial indiscipline is to understate it. Using its contempt jurisdiction, and by removing him from administrative and judicial work in early February, the Supreme Court has tried to ensure that he cannot cause further damage.

There has been a pattern to most of these incidents — he makes an allegation against fellow judges, no proof is offered and he doesn’t push it further, until the next incident and provocation. His judicial work has also stirred controversy — recently, he had a verbal altercation in open court with his fellow judge in the Calcutta high court where they differed in controversial circumstances over granting bail to the accused in a case.

This highlights a constitutional problem that the framers of the Constitution did not, for some reason, foresee: How do you discipline a judge short of impeachment?

Impeachment by Parliament is a long-drawn-out and difficult process. As it should be in a constitution where judicial independence is rigorously protected. Whatever “misbehaviour” a judge is alleged to have committed should be serious enough for Parliament to sit up and take notice before removing her or him from office. It is also the only sanction that can be imposed on an erring judge.

This leaves us with two problems: What to do when Parliament is disinclined to act on serious misbehaviour, and how to address less serious breaches of judicial discipline.

What actions can be taken against erring judges?

At present, there are certain informal measures that can be taken against an erring judge: change their workload to different cases, relieve them of all judicial work, or transfer to another high court. The first two can be done by the chief justice in charge of the high court, while the last requires the cooperation of the government.

Is it the appointment process which is to be blamed?

In India, appointment of judges has a tumultuous history. Till 1971, the Chief Justice of India’s recommendation was treated as gospel by the government. In the 1980s, the Centre tried to exercise more control over the appointment process by seeking more power to recommend judges to the High Courts and the Supreme Court.

A significant change occurred in 1993 with the Supreme Court’s judgment in SCAORA v Union of India, which brought the appointment of judges (especially senior most top court judges) under the judiciary. Today, the appointment process follows the recommendation by the five senior most Supreme Court judges (including the Chief Justice of India), which is binding on the Centre that issues the formal order of appointment. Known as the ‘collegium method of appointment’, the process is utterly opaque and arbitrary, causing deep dissatisfaction all around.

The Parliament’s crude attempt at ‘reforming’ this unsatisfactory system by replacing it with the National Judicial Appointments Commission was struck down by the Supreme Court in 2015 as being a violation of the Constitution’s basic structure.

Karnan was appointed as an additional judge of the Madras high court in 2009, upon the recommendation of the collegium of judges headed by then-Chief Justice of India, KG Balakrishnan. As with other judicial appointments, there is no official record as usual of the basis on which he was considered fit for appointment, what criteria were examined and whether any material against his elevation was considered and rejected.

While the Constitution does not prescribe any criteria beyond 10 years of legal practice and citizenship for a lawyer to be appointed as a High Court judge, in practice it’s usually at least 15 years and someone with a reasonably well-established practice in the High Courts. 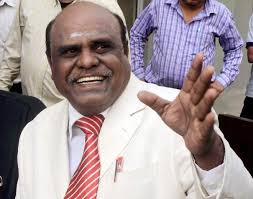 The controversy surrounding Karnan is part of a larger problem in the judiciary rather than a one-off problem. Late in 2016, the Supreme Court initiated contempt proceedings against former SC judge Markandey Katju for his ill-thought-out comments against judges. Multiple judges of High Courts and the Supreme Court have faced accusations of sexual harassment. In 2011, two High Court judges, PD Dinakaran and Soumitra Sen, faced impeachment proceedings for corruption and abuse of office, but resigned before removal. Nirmal Yadav of the Punjab and Haryana High Court also faced charges framed by a CBI court for allegedly receiving a bribe as a sitting judge in 2008.

Credibility is a problem that is plaguing the judiciary, and judges make up a veritable chunk of it. Never mind that it’s quick enough in punishing disobedience through contempt, the judiciary will always find it hard to command the respect of citizens if it’s not run honourably and by the right men and women. The blame for the poor choice of judges in the 1970s and 80s could perhaps be attributed to the government, but currently the judiciary lacks such excuses.

Even admitting that sometimes a poor appointment might have been made, there has been no effort to create a transparent mechanism to discipline judges who overstep the lines of propriety. The in-house procedure to examine and act on complaints against judges is seldom used and, in any case, works with little transparency. Like with appointments, the whole process is shrouded in secrecy with corridor gossip substituting for facts and informed debates. Those with legitimate grievances against a judge have little recourse from the judiciary itself, or for that matter, any other institution.

How the present collegium system can be improved?

The contempt case is still sub judice but it’s not clear what the Supreme Court’s endgame in these proceedings is. Its powers under the contempt jurisdiction are vast but do not extend to removing a High Court judge, something that can only be done through impeachment by the President. Whatever they choose to do in the context of Karnan, the SC judges must be aware that there is a larger problem that they cannot wish away — that of a judiciary whose credibility is slowly ebbing away.