DRDO Hands Over its Developed Products to Indian Army

Defence Research and Development Organisation (DRDO) recently handed over three of its products for induction into the Indian Army.

The NBC Recce Vehicle Mk-I, is developed by Vehicles Research & Development Establishment (VRDE) for carrying out post event recce of Nuclear, Biological and Chemical Contaminated areas. It is capable of collecting solid and liquid samples of biologically contaminated areas, mark the nuclear and chemical contamination zone and transfer the recce data speedily to support formations. On successful development of NBC RV Mk-I in association with DL, Jodhpur, the equipment was approved for induction into the Services.

Signalling a major shift in its position on talks with Pakistan on the Indus Waters Treaty (IWT), India has accepted an invitation to attend the next meeting of the Permanent Indus Commission (PIC) to be held in Lahore in March.

The Indus Waters Treaty is a water-distribution treaty between India and Pakistan, brokered by the World Bank. The treaty was signed in Karachi on September 19, 1960 by Prime Minister of India Jawaharlal Nehru and President of Pakistan Ayub Khan.

Permanent Indus Commission is a bilateral commission of officials from India-Pakistan, created to implement and manage goals of Indus Waters Treaty. Under the treaty, it is required that India and Pakistan meet every financial year. The Indus Commission is the first step for conflict resolution. If an agreement cannot be reached at the Commission level, the dispute is to be referred to the two governments. If the governments too fail to reach an agreement, the Treaty provides an arbitration mechanism. The last meeting of the commission was held in July 2016.

The Kishanganga Hydroelectric Plant is an $864 million dam which is part of a run-of-the-river hydroelectric scheme that is designed to divert water from the Kishanganga River to a power plant in the Jhelum River basin. It is located 5 km north of Bandipore in Jammu and Kashmir, India and will have an installed capacity of 330 MW. Construction on the project began in 2007 and is expected to be complete in 2016. Construction on the dam was temporarily halted by the Hague’s Permanent Court of Arbitration in October 2011 due to Pakistan’s protest of its effect on the flow of the Kishanganga River (called the Neelum River in Pakistan). In February 2013, the Hague ruled that India could divert a minimum amount of water for power generation.

The Ratle Hydroelectric Plant is a run-of-the-river hydroelectric power station currently under construction on the Chenab River, downstream of the village of Ratle in Doda district of the Indian state of Jammu and Kashmir. The project includes a 133 m (436 ft) tall gravity dam and two power stations adjacent to one another.

After months of difficulty posed mainly by India, Pakistan has succeeded in getting its official elected to the post of the Secretary General of the South Asian Association for Regional Cooperation (SAARC). This was backed by all members, including India, which made the selection consensus-based.

As the incoming chair, Pakistan was supposed to provide the next Secretary General. The new chief of SAARC was expected to take charge a year ago. Earlier, India had opposed holding of the 19th SAARC summit in Islamabad in November 2016 following the terror strike in Uri.

The South Asian Association for Regional Cooperation (SAARC) is an economic and geopolitical organisation of eight countries that are primarily located in South Asia or the Indian subcontinent.

Kurukh, an endangered tribal language of the Dravidian family, is set to get a new lease of life in West Bengal. It is spoken by the Oraon tribal community.

The Syrian Army has recaptured the ancient city of Palmyra from Islamic State (IS) for the second time in a year, with help from allied forces and Russian war-planes. 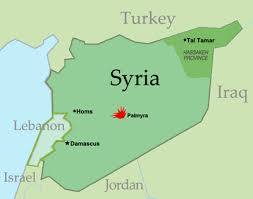 IS is on the back foot in Syria after losing territory in the north to an alliance of U.S.-backed, Kurdish-led militias, and to Turkey-backed Syrian rebels. The Syrian Army is also fighting IS in the area east of Aleppo and in the city of Deir al-Zor, where it controls an enclave that is besieged by the group.

Palmyra contains the monumental ruins of a great city that was one of the most important cultural centres of the ancient world. From the 1st to the 2nd century, the art and architecture of Palmyra, standing at the crossroads of several civilizations, married Graeco-Roman techniques with local traditions and Persian influences.

Palmyra is a UNESCO designated World Heritage site and home to some of the world’s most magnificent ancient ruins. The city is mentioned in the Hebrew Bible and was eventually incorporated into the Roman Empire, before passing to almost all empires to have operated in the region over some 2,000 years.

Sweden to reintroduce conscription after 6 years

Sweden has announced that it will reintroduce compulsory military service starting this summer to respond to global security challenges, including from Russia.

The Scandinavian nation, which has not seen armed conflict on its territory in two centuries, ended conscription in 2010 after it was deemed an unsatisfactory way of meeting the needs of a modern army. The government wants a more stable staff supply system and to boost its military capability because the security situation has changed.

Sweden is a Scandinavian country in Northern Europe. It is the third-largest country in the European Union by area, with a total population of 10.0 million.

Half of India-Bangladesh border fenced

Half of the 4,096-km border India shares with Bangladesh has been fenced. Land acquisition is a major challenge to completing the work by the 2019 deadline. Fencing is mainly aimed to curb infiltration and smuggling of cattle and fake Indian currency notes. The National Green Tribunal has prohibited all camping activity on beaches along the Ganga which fall within 100 meters from the middle of the river during lean season flow from Shivpuri to Rishikesh, a hub for eco-tourism and river rafting.

The judgment came on a petition highlighting how unregulated camping was leading to pollution in the river and adjoining areas. The petition also showed how tourists left behind litter and polluted the river and the soil.

In December 2015, the NGT in its order had banned rafting and camping activities along 36 kms stretch between Kaudiyala and Rishikesh. It had then noted that the “camping ban” would continue till the “regulatory regime comes into force”.

NGT has been established under the National Green Tribunal Act 2010 for effective and expeditious disposal of cases relating to environmental protection and conservation of forests and other natural resources.

The World Health Organisation (WHO) has published its first ever list of antibiotic-resistant `priority pathogens’ -a catalogue of 12 families of bacteria that pose the greatest threat to human health. This is bad news for India as most of these 12 superbugs are present in the country.