Central Institute of Plastics Engineering and Technology (CIPET) has been entrusted with the responsibility of implementing the scheme of the National Awards for Technology Innovation in Petrochemical sector and Downstream Plastics Processing Industry.

It is an autonomous organization under Department of Chemicals & Petrochemicals (DCPC). CIPET headquarters was established at Chennai in 1968 with UNDP assistance. It receives funding support from the administration ministry, OPEC, UNIDO and the World Bank.

This is the only institute of this kind in India where all facilities like design, tooling, processing and testing of plastics are available under one roof. CIPET caters to the needs of plastic industries through manpower training, processing, design and CAD/CAM/CAE, testing, consultancy, advisory and developmental services.

The BMD consists of two interceptor missiles, the Prithvi Defence Vehicle (PDV) for exo-atmospheric ranges and the Advanced Area Defence (AAD) missile for endo-atmosphere or lower altitudes. The BMD is critical to protect the country from the long-range ballistic missiles proliferating in the neighbourhood. DRDO expects to have shield ready for deployment by 2022.

High nitrogen steels (HNS) are a new class of high alloy martensitic, austenitic or duplex grades with up to 0.9 mass% of N in solid solution. They are applied e.g. to stainless tools and bearings, in chemical engineering and for high strength non-magnetic components.

The ‘Working Group on Migration’ set by the Ministry of Housing & Urban Poverty Alleviationin 2015 has submitted its Report to the Government.

According to Census 2011 and National Sample Survey Organisation (NSSO), migrants constitute about 30% of the country’s population and also of the total working force. The recent Economic Survey noted that annual migration in the country increased from 3.30 million in 2011 to 9.00 million in 2016.

In a major step taken to develop adequate sewage treatment infrastructure in Patna to keep Ganga clean, projects worth Rs 1,050 crore have been awarded under Namami Gange programme. The amount will be spent for setting up two two Sewage Treatment Plants (STPs), renovation of one existing STP, construction of two pumping stations and laying of new underground sewage network of about 400 kilometers.

Ganga unlikely to be cleaned by 2018:

According to some experts, the government is unlikely to be able to clean the Ganga by 2018, a target set by the government. Key reasons include “unreasonable” directions by the National Green Tribunal (NGT) questioning the operating capacity of sewage treatment plants in Uttar Pradesh and a delay in clearances by State governments to execute projects.

Scientists have used over 100,000 images extracted from Google Street View to map and quantify how street trees regulate urban ecosystems in megacities. While it was generally accepted that trees and plants helped in regulating urban ecosystems, until now researchers had very little data to quantify its extent.

How was this done?

Researchers developed a method to map and quantify how street trees regulate ecosystem services. Scientists analysed hemispherical photographs using an algorithm to quantify the proportion of green canopy coverage at 50 metre intervals across more than 80% of Singapore’s road network.

This new and relatively inexpensive method of rapidly estimating the amount of shade provided by street trees could help urban planners to identify areas of a city with low shade and prioritise the planting of new trees.

The Specified Bank Notes (Cessation of Liabilities) Act, 2017 has received President Pranab Mukherjee’s approval. The government has also notified this law making it a criminal offence to possess more than a certain number of the old Rs. 500 and Rs. 1,000 notes.

The decision to demonetise high value currency notes was announced by Prime Minister Narendra Modi on November 8, 2016, with the stated objective of hitting those with black money stashed away, as well as stopping the influx of counterfeit notes of these denominations.

‘Free trade should be fair too’

In an indication that increased market access for American companies will be a key priority in his engagement with New Delhi, U.S. President Donald Trump indirectly mentioned the 100% duty that India imposes on high-end motorcycles as a case of unfair trade practice and vowed to change it, in his first address to Congress.

Mr. Trump did not take India’s name, but India is the only major country that has a 100% customs duty on motorcycles. American company Harley-Davidson has been seeking a duty reduction for several years now.

According to experts, the Trump administration will be less concerned about balancing trade issues with strategic concerns. For India, that means that sectors with price controls, high customs duties, or compulsory local manufacturing rules may increasingly be on the radar screen.

A UN-established commission has issued a damning report on human rights violations in Syria’s war-ravaged Aleppo, accusing both sides to the conflict of committing war crimes. The northern Syrian city of Aleppo was caught in a brutal four-year deadlock. It was a key battleground in the war between forces loyal to President Bashar al-Assad and rebels who want to overthrow him.

In November, Syrian government forces launched a renewed assault, and rapidly retook almost all of the opposition-held east. By mid-December they had pushed the rebels into just a few neighbourhoods.

Tens of thousands of civilians fled those districts. The UN said it had received allegations that hundreds of men had gone missing since crossing into government-controlled areas – and that rebels prevented some civilians from leaving.

Aleppo was once Syria’s largest city, with a population of about 2.3 million. It was also the country’s industrial and financial centre. The old city is a Unesco World Heritage site and was famous for its 13th Century citadel, 12th Century Great Mosque and huge covered markets. 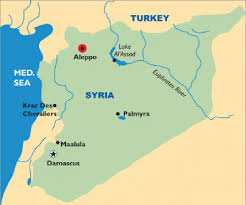