1) Inequality is rising across the world. Critically examine its causes and suggest solutions to eliminate inequality. (200 Words)

Oxfam is an international confederation of charitable organizations focused on the alleviation of global poverty. Oxfam was founded at 17 Broad Street in Oxford, Oxfords hire, in 1942 as the Oxford Committee for Famine Relief by a group of Quakers, social activists, and Oxford academics; this is now Oxfam Great Britain, still based in Oxford. It was one of several local committees formed in support of the National Famine Relief Committee. Their mission was to persuade the British government to allow food relief through the Allied blockade for the starving citizens of occupied Greece or the wealth gap.

THE CAUSES OF HUGE INEQUALITY:- 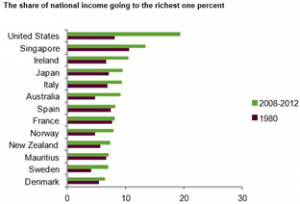 2) It is said that the Supreme Court’s judgment on sectarian appeals during election campaigns interprets the Representation of the People Act, 1951 correctly and to its intended effect. Do you agree? Justify. (200 Words)

In a judgment which could have significant impact on electoral politics, the Supreme Court of India has held by a razor thin majority that Section 123(3) of the Representation of People Act, 1951 has to be given a broad and purposive interpretation.

Section 123(3) of the Representation of Peoples Act states that the promotion of, or attempt to promote, feelings hatred between different classes of the citizens of India on grounds of religion, caste, community, by a candidate is legally banned.

Recent judgment doesn’t underscore the interpretation to its intended effect:

Religion, caste and language are as much a symbol of social discrimination imposed on large segments of our society. They are part of the central theme of the Constitution to produce a just social order. Electoral politics in a democratic polity is about social mobilization and hence though intended to regulate elections the verdict may run into practical errors while implementing.

Topic: mechanisms, laws, institutions and Bodies constituted for the protection and betterment of these vulnerable sections

3) Discuss the significance of the Supreme Court’s judgment in the Silicosis case. (200 Words)

In a landmark decision, the Supreme Court bench comprising Justices Kurian Joseph and Rohinton Fali Nariman, directed the Gujarat Government to deposit Rs.3 lakhs each to the kin of 238 workers from Madhya Pradesh, who lost their lives due Silicosis, an occupational disease, which they contracted while working in stone crushing in Gujarat’s Godhra district.

About 10 million workers are exposed to silica/quarts dust in India and most of them are in engaged in unorganized sectors. So, at this time this judgment becomes even more significant because it took in its purview the insecure unorganized sector.
What has already been lost cannot be compensated with money but it can be hoped that it will ensure a better future for many coming generations.

A special economic zone (SEZ) is an area in which business and trade laws are different from rest of the country. SEZs are located within a country’s national borders, and their aims include: increased trade, increased investment, job creation and effective administration. To encourage businesses to set up in the zone, financial policies are introduced. These policies typically regard investing, taxation, trading, quotas, customs and labour regulations. Additionally, companies may be offered tax holidays, where upon establishing in a zone they are granted a period of lower taxation.The creation of special economic zones by the host country may be motivated by the desire to attract foreign direct investment (FDI).

India was one of the earliest Asian countries to establish a manufacturing- oriented SEZ. The first SEZ in India Was developed by the Central Government under the ‘export processing zone’ (EPZ) scheme in the port city of Kandla in Gujarat in 1965. Since then, SEZs have been an integral part of India’s export promotion policy. Subsequent to theKandla EPZ, the central Government established five more zones by the late 1980s and a seventh zone in 1994.

Although the SEZs do help in increasing the economic growth of the country in affiliated sectors, the govt does need to minimise the negative externalities of setting up such industries. The SEZs to be set up under Make in India project should be spread evenly over the country and help in carrying out a sustainable development of the region, while keeping in view all the environmental and social costs and helping in furtherance of inclusive growth.

Topic: Effects of liberalization on the economy,

5) The “reforms” in 1991 laid out a new trajectory in which federalism was dichotomised into two parts—political and fiscal. Critically analyse the changing nature of fiscal federalism since 1991 reforms. (200 Words)

Widening regional disparity has been a feature of India’s social and economic trajectory at least since the 1960s. The process of economic reforms since 1991 has certainly accentuated it—both between and within states— in sectoral as well as social dimensions. This intensification of regional disparity is also characterized by wider sectoral disparities, especially between agriculture and non-agriculture, among different regions, and widening social disparity along with wider rural–urban disparities. The relative ranks of different states in terms of their per capita income levels have remained practically unchanged in the last three decades, with very moderate changes in the ranks of middle- or high-income states within their respective groups.

Changing nature of fiscal federalism since 1991-

Positive effects on politics and economy-

Fiscal federalism in India has certainly undergone irreversible changes after the economic reforms. The duty of central government is to strive for equitable distribution of the dividends of this process.

6) Manufacturing output grew 7%–8% annually since 1991, with a marked improvement in the variety and quality of goods produced. Yet, its share in gross domestic product has practically stagnated, with a sharp rise in import intensity. Examine why. (200 Words)

India’s industrial production has diversified with perceptible improvements in the quality and variety of goods produced with growing domestic competition. Yet, the manufacturing (or industrial) sector’s share has stagnated at about 14%–16% of gross domestic product (GDP) after the reforms. Though India has avoided deindustrialization— defined as a decline in the manufacturing (industrial) sector’s share in GDP, or share in workforce—it stares at a quarter century of stagnation, in contrast to many Asian economies that have moved up the technology ladder with a rising share of manufacturing in domestic output and global trade.

Topic:  Effects of liberalization on the economy,

For the economy of independent India, 1991 was a tumultuous and momentous year that witnessed radical departures from the past. The accentuated political uncertainties that surfaced were juxtaposed with an already formidable macroeconomic crisis. This needed long-term and sustainable solution.

The process of economic reforms was shaped largely by economic problems of the government because:

Though the process of economic reforms was accentuated by the economic problems of the government, the problems were result of inherent faults of the economic system and the reforms were carried out with both the objectives of short term and long term solutions. This included-

Thus the reforms reflected the desire to meet both short term and long term problems of the economy and were instrumental in making one of the leading powers in the world.

The agrarian conditions in different parts of India are different and hence need to modify as per them. The states should take initiative and make required changes so that interests of both owner and cultivator are maintained.