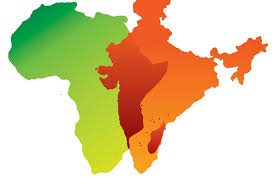 The foundations were laid by Mahatma Gandhi. According to him, there will be a “commerce of ideas and services and not of raw materials and goods like imperialist powers”. The present government continues to take this approach as the foundation of India’s Africa Policy. According to Vice President Hamid Ansari, “ India shares Africa’s dreams and India Africa cooperation is genuine 2 way street partnership”

Nehru talked about Afro Asian solidarity. African countries provided strength to Nehru’s NAM. The policy in this phase is described as “ideational” and “pragmatic”

This is the phase of reengagement with Africa. However the lead was taken by private sector, rather than government. Private sector of India should be given credit to push attention of GoI towards the region of strategic and economic importance.

Since 2008, India and Africa relations have been institutionalized. India has started engagement with African Union (Pan African Platform). So far 3 summits have been organized under the aegis of India Africa Forum Summit. It is to be noted that the approach of GoI is also influenced by China. China has also initiated the Forum for Africa and China cooperation in the year 2000.

Whether India’s relationship with Africa should be seen through Chinese prism?

Thus it would be wrong to conclude that India’s African outreach is with a view to counter China’s expanding influencing in the region.  Moreover Chinese strategy of exporting Chinese labour as part of its push to create excess capacity abroad to counter unemployment in China is rattling the African population. There have been protests against the discriminatory employment practices of China in matters of employment in Nigeria, Kenya etc.

Challenges India faces from the presence of countries like U.S in Africa

Shortcomings of U.S (and other developed countries) involvement

Shortcomings of India’s involvement in Africa

Impact of IAFS process so far: