Tamil Nadu and Kerala, the two States that were holding out against pressure from New Delhi to implement the National Food Security Act (NFSA), have finally given their approval for the implementation of the act.

The Centre had recently warned of action if Kerala and Tamil Nadu failed to implement the National Food Security Act (NFSA) and had said if there was no immediate improvement in the situation, foodgrains for distribution to above poverty line (APL) families in these states will be provided at a higher rate. So far, the central government has been able to implement the NFSA in 34 states and union territories. 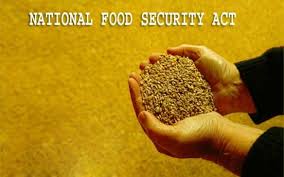 About the National Food Security Act, 2013:

Also called as the Right to Food act, this act aims to provide subsidized food grains to approximately two thirds of India’s 1.2 billion people. It extends to the whole of India. The cost of the implementation is estimated to be $22 billion(1.25 lac crore), approximately 1.5% of GDP.

Under the provisions of this act, beneficiaries are able to purchase 5 kilograms per eligible person per month of cereals at the following prices:

Why there was delay in the implementation of the act?

Effective implementation of NFSA would make an important contribution to food security and improved nutrition in the country. Recent experience shows that a well-functioning PDS makes a big difference to people who live on the margin of subsistence.

Food Security law is definitely a boon, because it guarantees basic need, food. But the PDS system must be strengthened to avoid corruption and leakages. And procurement price must be increased. Farmers must be protected. If this law is implemented effectively, it can help in eradicating hunger and malnutrition.