The Priority initiatives under the MoU would be:

Cabinet approves an Undertaking between India and Korea on Mutual Recognition of Certificates for Seafarers, 1978

The Union Cabinet has given its approval for signing of an Undertaking between India and Korea on Mutual Recognition of Certificates.

Signing of the Undertaking will pave way for recognition of maritime education and training, certificates of competency, endorsements, training documentary evidence and medical fitness certificates for seafarers issued by the Government of the other country.

Project Saksham, a new indirect tax network of the Central Board of Excise and Customs (CBEC), has been approved by the Cabinet Committee on Economic Affairs (CCEA).

Under the project, the CBEC’s existing IT systems will be integrated with the GST Network. This is required for processing of registration, payment and returns data sent by GSTN systems to CBEC, as well as act as a front-end for other modules such as audit, appeals, investigation.

A new handheld device to detect melamine in milk

Researchers at the Indian Institute of Science (IISc), Bangalore have developed a handheld melamine detector. With this detecting melamine in milk is expected to become easy, quick and inexpensive.

How is it detected?

In this method, leaf extract of a commonly seen weed parthenium along with silver nitrate is used for detecting the presence of melamine in milk. 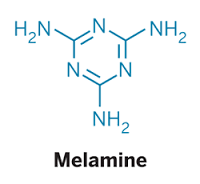 Why be concerned about Melamine in milk?

Melamine content of more than 1 ppm in infant formula and more than 2.5 ppm in other foods should be viewed with suspicion of adulteration.

Melamine is an organic base chemical most commonly found in the form of white crystals rich in nitrogen.

What is melamine generally used for?

Why is melamine added into milk?

The addition of melamine increases the nitrogen content of the milk and therefore its apparent protein content.

However, addition of melamine into food is not approved by the FAO/WHO Codex Alimentarius (food standard commission), or by any national authorities.

What are the health effects of melamine consumptions in humans?

While there are no direct human studies on the effect of melamine data from animal studies can be used to predict adverse health effects. Melamine alone causes bladder stones in animal tests. When combined with cyanuric acid, which may also be present in melamine powder, melamine can form crystals that can give rise to kidney stones.

These small crystals can also block the small tubes in the kidney potentially stopping the production of urine, causing kidney failure and, in some cases, death. Melamine has also been shown to have carcinogenic effects in animals in certain circumstances, but there is insufficient evidence to make a judgment on carcinogenic risk in humans.

Almost every household has a bank account: Labour Bureau

According to the latest Labour Bureau data, almost every household in the country is a part of the banking system, mainly due to government’s financial inclusion plans.

According to the data, Government of India’s recent initiatives to enhance the financial inclusion and accessibility of financial institutions such as Pradhan Mantri Jan Dhan Yojana and Pradhan Mantri Micro Units Development and Refinance Agency (Mudra) Yojana may have translated into entering of more population in the ambit of formal financial activities.