China has warned US that its dangerous and provocative actions in the South China Sea could lead to minor incidents that spark war. The warning came after US guided missile destroyer sailed within 12 nautical miles of an artificial island created and claimed by China. This island is situated in the South China Sea. The South China Sea is a strategic waterway through which about a third of the entire world’s traded oil passes. China insists that it has sovereign rights over the entire South China Sea while its neighbors dispute this claim. Meanwhile the China is also upset that an international tribunal ruled last week that it had the power to hear the case brought before it by the Philippines over its territorial draw with China in the south China Sea. However, China has refused to take part in the proceedings.

In terms of international law, artificial islands created by China are not recognized. According to the law only those islands which are, at high tide, above water can be considered proper islands. But, the islands, on which China claims sovereignty, are submerged at high tide. In terms of the United Nations Law of the Sea Convention, there is a provision regarding the extension of the EEZ from the coastal region or from the Islands. But, China has been using this provision in a flexible manner. In the Yellow Sea it claims EEZ from the coastline. In the South China Sea, it uses Island as the basis for measuring the EEZ. 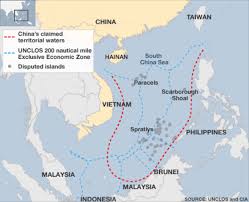 China claims most of the South China Sea, one of the world’s busiest sea lanes, although Vietnam, Malaysia, Brunei, the Philippines and Taiwan have rival claims. Beijing says the islands will have mainly civilian uses as well as undefined defence purposes. Although China asserts its historical rights in most of the South China Sea, its reclamation project at seven locations can only be seen by other countries as a blatant case of expansionism.

It is to be noted that the US has not ratified the UN law on sea. Thus, some international experts are of the opinion that the US is trying to suppress China from becoming a superpower. The US president has also planned to visit Malaysia and Philippines shortly. Thus, the ultimate strategy of the US is to rally the region behind its leadership and then negotiate with China. The US is also apprehensive of China’s growing military power.

The South China Sea is a vital waterway for the world’s trading vessels. Free and safe navigation in these waters is of common interest not only to the United States, China and countries of Southeast Asia, but also to all countries, including Japan.