Aiming to enhance the country’s image as a friendly investment destination, the government along with World Bank has released a state-wise report on the ease of doing business – a report in which Gujarat has topped with a score of 71.14%.

With this, it is expected that investments will begin to flow to States that make it easier to do business, seeing which the low-rank States could be encouraged to take up reforms.

States seek review of ban on CMs’ photos in ads

The Supreme Court has sought the Centre’s response on pleas made by several State governments to review its verdict banning the publication of photographs of Chief Ministers in government advertisements.

What the states say?

The States have been arguing that they enjoy autonomy in a federal structure of governance, and so, if the court can allow the Prime Minister’s photographs to be published in government advertisements heralding new projects and welfare schemes, Chief Ministers too have every right to have their photos published.

Why SC had banned?

The court says such photos divert attention from the policy of the government, unnecessarily associate an individual with a government project and pave the way for cultivating a “personality cult.”

Seeking to carry forward the Gujarat-model of irrigation reform in the country and to quickly complete the task of aquifer mapping to quantify available groundwater resources, the Centre has constituted a seven-member committee to restructure the central water commission (CWC) and the central ground water board (CGWB) – the two key central bodies that manage water resources in India.

The committee has been asked to:

Since more than 60% of the available water is used for irrigation purpose, the focus of the panel would be to recommend suitable re-orientation and restructuring of the CWC and the CGWB at river basin and sub-basin level to take care of the needs of farming sector.

Why restructuring of these water bodies is necessaruy?

While the CWC is working for managing\monitoring surface water, the role of the CGWB is to look after the ground water situation in the country.

Gujarat’s model inlcudes water harvesting, drip irrigation, conservation of water resources through micro irrigation network and setting up or creating village pond, check dams and ‘boribandh’ (sand bag) dams so that water actually reaches the farmers in all areas within the state.

According to the Statistical Year Book, brought out recently by the Ministry of Statistics and Programme Implementation (MoSPI) that is overseeing progress on the MDGs, India is not on track to meet the Millennium Development Goals, the deadline for which expires this year.

MDGs: What are they?

The eight millennium development goals are:

Each goal has specific targets, and dates for achieving those targets.

With a view to promote and give due acknowledgement and importance to sports having regional spread, Ministry of Youth Affairs and Sports has recognized the Indian Kalarippayattu Federation as Regional Sports Federation. 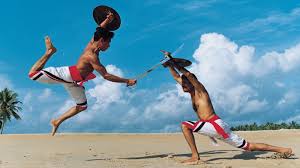