United Nations’ Educational, Social and Cultural Organisation (UNESCO) has shown keenness to collaborate with the Ministry of Urban Development in implementing the ‘Heritage Development and Augmentation Yojana (HRIDAY).


Where? The programme will be launched in the cities such as Mathura, Amritsar, Gaya, Kanchipuram, Vellankani, and Ajmer.


With no CIC, RTI appeals pile up


The post of Chief Information Commissioner has been lying vacant since august, 2014.


So what? When a new Chief Information Commissioner is appointed, he or she will find a mammoth 10,000 Right to Information appeals pending.


Why the appointment is being delayed? 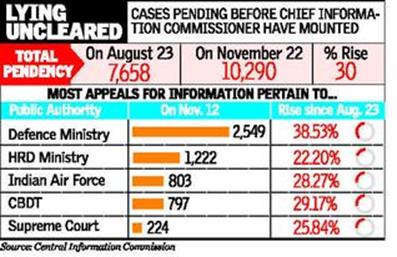 
The Central Information Commission (CIC) is set up under the Right to Information Act and is the authorised body, established in 2005, under the Government of India.


The life and times of Shakti Chattopadhyay: An album


Seeking to capture the life and times of late iconic Bengali poet and author Shakti Chattopadhyay, an album has been released containing a compilation of the poet’s recordings of songs and poems.


Opposition parties, during the winter session, reiterated their opposition to the Insurance Bill.


Why? Many parties are against the idea of raising the cap on FDI in insurance sector.


What are the problems now?


The bill will easily be passed in Lok Sabha since the government is in majority in LS.


Aim: the amendments are aimed at removing archaic and redundant provisions in the legislations and incorporating certain provisions to provide Insurance Regulatory Development Authority (IRDA) with flexibility to discharge its functions effectively and efficiently. The overall objective is to further deepen the reform process which is already underway in the insurance sector.


The Trade Policy Forum is a key element of the strategic dialogue, serving to advance the two countries’ efforts to expand the economic ties.


Aim: The Forum primarily aims at providing an environment, with the global rules-based trading system that supports expanding trade and investment and helps to strengthen the commercial ties between the U.S. and Indian businesses.


How is it helpful?


Full potential of the 2 countries is achieved by developing and implementing trade policies through transparent procedures that comply with international obligations, fostering an environment conducive to technological collaboration and innovation, and by promoting inclusive economic growth and job creation in the United States and India.


The 3 organizations are: The World Toilet Organisation (WTO), WASTE and the Financial Inclusion Improves Sanitation and Health (FINISH).


The objectives would be achieved through a mix of policy dialogue, lobbying and advocacy work for sanitation coupled with on-the-ground sanitation activities. The agreement is for three years.