Objective: to give tribal artisans an opportunity to showcase and sell their traditional Art and Craft works directly to the customers and get their feedback which would help them in having valuable inputs.


What it does: Aadishilp provides them a platform for direct interface with art and craft lovers, share their talent with the urban elite and know the customers taste and preferences for adapting their product designs and creations accordingly.


The union government is all set to amend the Lokpal Act and Delhi Special Police Establishment Act.


Why: to do away with the requirement of quorum in the high-profile committees to select the anti-corruption ombudsman and the CBI Director, respectively.


How it helps: The inclusion of a clause in the statutory provisions dealing with the selection panels would provide a legal safeguard against any challenges on the validity of an appointment.


Necessary amendments would also be made in the statutes to include the leader of the single largest group in the Opposition as a member of the selection committee in the absence of a recognised Leader of the Opposition in the Lok Sabha. This would bring these statutes in line with the Central Vigilance Act, 2003 and Right to Information Act, 2005. 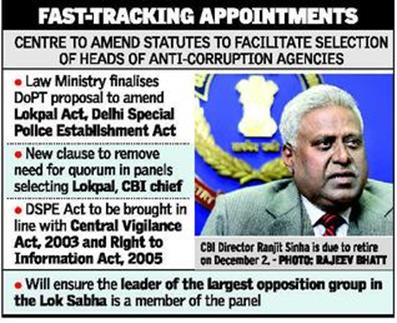 
Currently, CBI director is selected by a selection committee and the committee is empowered by the DPSE act. The committee consists of:


When making recommendations, the committee considers the views of the outgoing director.


The selection committee, under the Lokpal Act, includes the Prime Minister, the leader of the opposition in Lok Sabha, speaker, Chief Justice of India or a Supreme Court judge nominated by him and an eminent jurist to be nominated by the President or any other member.


Traditional made snana can continue for now: HC


The Karnataka High Court has said that it cannot stop the tradition of Made Snana followed for centuries until it decided the constitutional validity of the practice. With this, it has kept in abeyance its 2012 order of accepting “modified form of made snana” proposed by the State government.


It is a practice observed in certain temples of Karnataka wherein devotees roll over in devotion on the used plantain leaves after others taking food on the leaves. Progressive people of Karnataka have strongly condemned the practice and have been demanding its ban.


Why it is observed:


People from lower strata of society in general roll over the plantain leaves after the leaves are used to take food by upper caste people (Brahmins). The practice has general approval by Seers of several maths. After the rolling over, the vestiges covered on the bodies of the devotees are washed in nearby Kumaradhara River and after this bath in the river, the ritual is said to be completed. The practice is said to be more than 500 years old.


Why it is being opposed:


It is also being said that banning the ritual would amount to violation of fundamental rights of an individual when it comes to choosing faith.


The Indian Space Research Organisation has won the Indira Gandhi Prize for Peace, Disarmament and Development for 2014.


Union Law Minister has written to Chief Ministers to ratify the National Judicial Appointments Commission Bill at the earliest.


Why the Bill requires ratification by the states:


Composition of the commission:


The Commission will consist of the following persons:


Functions of the Commission:


The Securities and Exchange Board of India (SEBI) has revamped the ‘Prohibition of Insider Trading’ regulations with more stringent measures, aligning its norms with international practices. It has also made amendments to delisting regulations.


The new rules, based on the Justice Sodhi Committee report, would replace the SEBI (Prohibition of Insider Trading) Regulations 1992. The new regulations strengthen the legal and enforcement framework, align Indian regime with international practices, provide clarity with respect to the definitions and concepts, and facilitate legitimate business transactions.


Why it was necessary:


According to the New Regulations:


The OECD has upped its 2015-16 growth projection for India to 6.6 per cent. It had pegged it at 5.7 per cent in May. The growth had remained sub-5 per cent in the last two financial years. The OECD projects it to be 5.4 per cent this financial year.


Other important observations made by OECD survey:


Recommendations made by OECD survey: 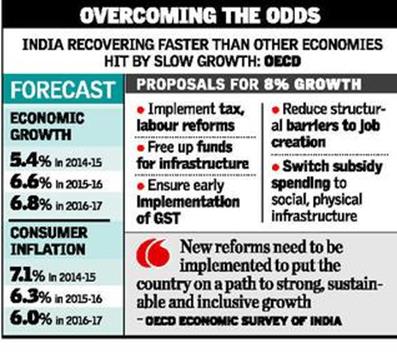