It is a joint training exercise between Indian and Chinese army.


Aim: Getting acquainted with each other’s procedures in Counter terrorism.


Why is it Important?


It is the Indo Russian bilateral Air Force exercise.


The union Finance Minister has decided to re-launch KVP.


Kisan Vikas Patra (KVP) – a certificate savings scheme was launched by the Government on 1st April, 1988. The scheme provided facility of unlimited investment by way of purchase of certificates from post offices in various denominations. The maturity period of the scheme when launched was 5 ½ years and the money invested doubled on maturity. The scheme was very popular among the investors and the percentage share of gross collections secured in KVP was in the range of 9 % to 29 % against the total collections received under all National Savings Schemes in the country.


Why is it important?


A Memorandum of Understanding (MoU) was signed, recently, between Department of Economic Affairs (DEA), Ministry of Finance, Government of India and Department of Commerce, United States of America (USA) on establishing Infrastructure Collaboration Platform.


The memorandum seeks to establish a United States India Infrastructure collaboration platform, under which both the Governments intend to coordinate and cooperate with the goal of facilitating U.S. industry participation in Indian infrastructure projects to improve the bilateral commercial relationship and benefit both the Participants’ economies.


The “Qaumi Ekta Week” (National Integration week) will be observed all over the country, from the 19th to 25th November, 2014.


The week long programmes to be observed during Qaumi Ekta Week will be as under:


MoU on Technical Cooperation in the Rail Sector


New data released by the United Nations Population Fund’s (UNFPA) State of the World’s Population Report shows that India has the world’s largest population of 10-24 year-olds, but this demographic dividend is nearing its end.


Other important observations made by the report: 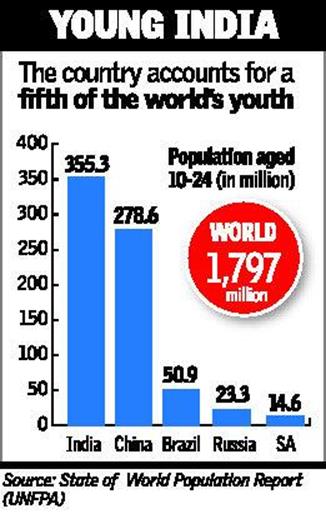 The emergence of a large youth population of unprecedented size can have a profound effect on any country. Whether that effect is positive or negative depends largely on how well governments respond to young people’s needs and enable them to engage fully and meaningfully in civic and economic affairs.


UNFPA, the United Nations Population Fund, is the lead UN agency for delivering a world where every pregnancy is wanted, every birth is safe, and every young person’s potential is fulfilled.


It was formerly called as the United Nations Fund for Population Activities. The UNFPA supports programs in more than 150 countries, territories and areas spread across four geographic regions: Arab States and Europe, Asia and the Pacific, Latin America and the Caribbean, and sub-Saharan Africa.


UNFPA is the world’s largest multilateral source of funding for population and reproductive health programs. The Fund works with governments and non-governmental organizations in over 150 countries with the support of the international community, supporting programs that help women, men and young people:


UNFPA’s work is guided by the Program of Action adopted by 179 governments at the International Conference on Population and Development in 1994.


The main goals of the Program of Action are:


These goals were refined in 1999. One of the most important additions concerned HIV:


The Tulunadu pastime of Kambala (slush track buffalo racing) may soon be confined to the pages of history as activists are demanding total ban on it.


Udupi district has already issued orders banning Kambala — which is conducted across the coast post-monsoon. The ban came after the Supreme Court issued an order. The Supreme Court had in its order banned the holding of all such events including ‘Jallikattu’ and bullock cart races.


In case of violation, legal action would be taken against officers and organisers as per the provisions of Prevention of Cruelty to Animals Act 1960.


Kambala is an annual Buffalo Race held traditionally under the auspices local land lords and households or Patel of village, in coastal Karnataka, India. The Kambala season generally starts in November and lasts until March.


Since the last two decades nearly 18 kambalas are held. As of now, more than 45 he-buffalo races are held annually in Coastal Karnataka, even in smaller remote villages. 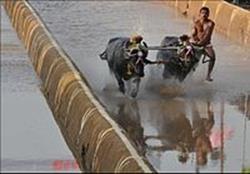 Why is it held? : As an entertaining programme for the rural people.


Why is it being opposed?


Kambala has been criticised by animal lovers as they perpetuate cruelty due to the use of whips on the racing buffaloes. Kambala organisers, on their part, contend that if whips are not used on the buffaloes, they may not run with speed in the race.


An Indian Air Force (IAF) team successfully flight-tested the surface-to-air missile, Akash, from the Integrated Test Range at Chandipur near Balasore in Odisha. 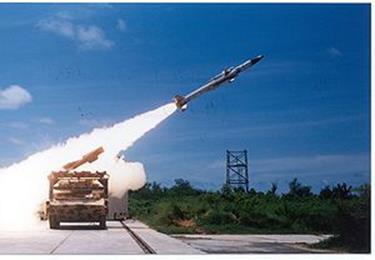