June 21 will be made the ‘International Day of Yoga’


In an overwhelming response to call by the Prime Minister of India for commemorating an International Day of Yoga, about 130 countries have joined as co-sponsors to an India-led U.N. General Assembly resolution recognising yoga’s benefits.


The draft resolution for an ‘International Day of Yoga’ was prepared by India and informal consultations were convened last month by the Indian mission in the U.N. General Assembly where views on the topic were expressed by other delegations.


The draft resolution, known as the ‘L Document,’ was finalised with 130 countries co-sponsoring it, an all-time record for a resolution of such kind. Expected to come up for adoption in the General Assembly on December 10, it would recognise that “yoga provides a holistic approach to health and well-being.”


The resolution would also proclaim June 21 as the ‘International Day of Yoga.’


It would recognise that wider dissemination of information about the benefits of practising yoga would be beneficial for the health of the world population and invite all member and observer states, organisations of the United Nations system and other international and regional bodies to observe the International Day in order to raise awareness of the benefits of practising yoga.


General Assembly resolutions usually require a simple majority (50percent of all votes plus one) to pass. However, if the General Assembly determines that the issue is an “important question” by a simple majority vote, then a two-thirds majority is required; “important questions” are those that deal significantly with maintenance of international peace and security, admission of new members to the United Nations, suspension of the rights and privileges of membership, expulsion of members, operation of the trusteeship system, or budgetary questions.


Lightning strikes may go up due to global warming


New research says that lightning strikes are likely to increase by 50 per cent thanks to global warming.


Studying predictions of precipitation and cloud buoyancy in 11 different climate models, researchers have concluded that their combined effect will generate more frequent electrical discharges to the ground. With warming, thunderstorms become more explosive.


Precipitation — total amount of water falling on ground in the form of rain, snow — is basically a measure of how convective the atmosphere is. It is convection that generates lightning.


More lightning strikes mean more human injuries; estimates of people struck each year range from the hundreds to nearly a thousand, with scores of deaths, noted the study.


Lightning is a powerful sudden flow of electricity (an electrostatic discharge) accompanied by thunder that occurs during an electric storm. The discharge will travel between the electrically charged regions within a thundercloud, or between a cloud and a cloud, or between a cloud and the surface of a planet. The charged regions within the atmosphere temporarily equalize themselves through a lightning flash, commonly referred to as a strike if it hits an object on the ground. There are three primary types of lightning; 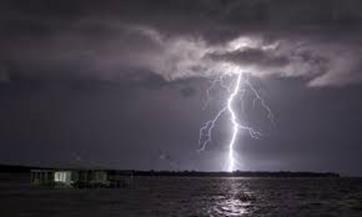 Although lightning is always accompanied by the sound of thunder, distant lightning may be seen but may be too far away for the thunder to be heard.


In order for an electrostatic discharge to occur, two things are necessary:


Lightning primarily occurs when warm air is mixed with colder air masses, resulting in atmospheric disturbances necessary for polarizing the atmosphere. However, it can also occur during dust storms, forest fires, tornadoes, volcanic eruptions, and even in the cold of winter, where the lightning is known as thundersnow. The science of lightning is called fulminology, and the fear of lightning is called astraphobia.


About 70% of lightning occurs over land in the tropics where atmospheric convection is the greatest. This occurs from both the mixture of warmer and colder air masses, as well as differences in moisture concentrations, and it generally happens at the boundaries between them. Lightning is usually produced by cumulonimbus clouds. 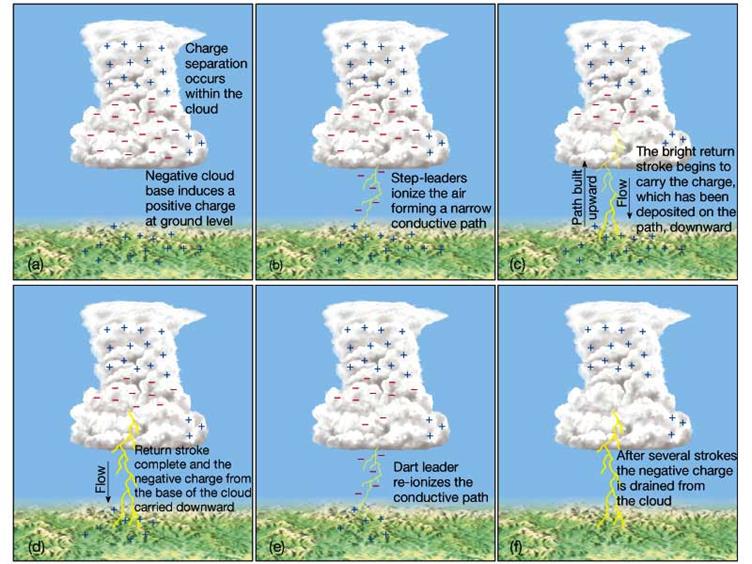 A video on how Lightning occurs: https://www.youtube.com/watch?v=pHV6u-RwroY.


To preserve the sanctity of the Question Hour, Rajya Sabha Chairman has decided to move it from the customary 11 a.m. to noon in the Upper House starting this winter session.


The new rules will have to be presented and ratified by the Rajya Sabha when it convenes on November 24. 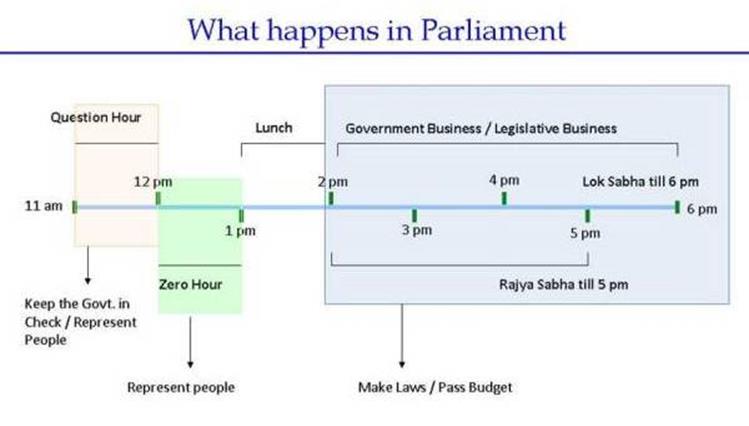 Question Hour: The first hour of every sitting of Parliament is generally reserved for the asking and answering of questions.


A Question is one of the devices available to a Member of Parliament to seek information on matter of public importance concerning subjects detail with by the Ministries and Departments and to force on the omissions and commissions of the government.


There are three types of Questions:


Starred Questions: Starred questions are required to be answered orally by the concerned Minister. These Questions are distinguished by an asterisk mark. Members of Parliament have the option to raise the Supplementary Questions based on the replies to the starred Questions. These Questions for which a notice period of minimum 10 days and maximum 21 days has been prescribed are asked during the question Hour on the fixed days allotted to the Ministry/Department.


Zero Hour: The time immediately following the Question Hour has come to be known as “Zero Hour”. Members can, with prior notice to the Speaker, raise issues of importance during this time.


The Supreme Court has given the Centre a month’s time to work out a way to implement an Election Commission panel report recommending proxy voting and e-postal ballots as alternatives to do away with a legal provision insisting on physical presence of an NRI in his local constituency at the time of voting. The 12 member committee was headed by Vinod Zutshi.


The Parliament of India approved the voting rights for the Non-Resident Indians in the Elections, with the Lok Sabha adopting the Representation of the People (Amendment) Bill, 2010. However, according to the Bill, the person will be able to exercise the franchise only if he or she is physically present in their constituency on the polling day at the polling station along with the original passport. This had created a problem.


The fatality count in Tamil Nadu is the highest in the country, according to data released by the Ministry of Health and Family Welfare.


The death in Chhattisgarh of more than a dozen women in a sterilisation camp has captured the nation’s attention. But the death of more than 130 women in Tamil Nadu between 2008 and 2012 alone has hardly received any scrutiny. Tamil Nadu claims to have one of the best public health systems in the country, but it records an overwhelming number of deaths post-sterilisation.


One reason for Tamil Nadu’s poor performance is that the Union Ministry counts a death only after compensation is disbursed. Perhaps, a few States do not release any money or under-report deaths. Or, the death takes years to be recorded because of the delay in giving compensation to the family. This is why Tamil Nadu’s death count drops to 5 during 2012-13, as reported in 2014.Despite these shortfalls in data accuracy, Tamil Nadu consistently records more deaths due to sterilisation every year than the national average of 11.There is also a significant gender-divide in the State’s sterilisation campaign, with women accounting for 99.4 per cent of all procedures.


The District Level Health Survey for 2012-13 shows that little more than half of the State’s population use family planning methods. An overwhelming proportion is attributed to female sterilisation. 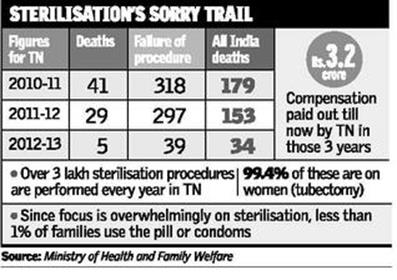 
Bollywood actor-director Farhan Akhtar has become the first man in U.N. Women’s history to be appointed its Goodwill Ambassador for South Asia.


The actor will serve as an advocate for U.N. Women’s newly-launched HeForShe initiative for gender equality and women’s empowerment.


The UN organisation, dedicated to gender equality and women’s empowerment, chose Farhan for raising voice against gender inequality and violence against women and girls in India through his Men against Rape and Discrimination (MARD) campaign.


Since the early 1950s, the United Nations has enlisted the volunteer services and support of prominent personalities from the worlds of art, music, film, sport and literature to highlight key issues and to draw attention to its activities. Over the years, many persons of international stature have lent their names, talents and time to support UN programmes—a number of UN Secretariat units and separately funded and administered Funds and Programmes of the United Nations have designated such individuals as Goodwill Ambassadors or celebrity advocates, who are working on behalf of the United Nations worldwide.


‘HeForShe‘ is a global solidarity movement to end gender inequality by 2030. It is a campaign for gender equality initiated by UN Women. It aims to engage men and boys as agents of change for the achievement of gender equality and women’s rights, by encouraging them to take action against inequalities faced by women and girls. Grounded in the idea that gender equality is an issue that affects all people — socially, economically and politically — it seeks to actively involve men and boys in a movement that was originally conceived as “a struggle for women by women”.


In a major scientific advance, researchers at the University of Washington have established a ‘brain to brain communication’ link using the Internet. The finding provides scientific evidence of the human brain being able to send a signal to another person, leading to a motor action — such as a hand moving. The possibilities of effectively treating cognitive disorders such as autism or making a paralysed person communicate with others have brightened after this breakthrough.


The “brain-to-brain” connection was established between two persons sitting in different buildings of the university. The signal from the sender’s brain, recorded using electroencephalography, was interpreted by a computer and transmitted over the Internet to a transcranial magnetic stimulation machine, which delivered a magnetic impulse to the receiver’s brain.


One participant, the ‘sender,’ is hooked to an electroencephalography machine that reads his brain activity and sends electrical pulses via the Internet to the ‘receiver,’ who has a transcranial magnetic stimulation coil placed near the part of his brain that controls hand movements. With this technology, the sender can issue a command to move the hand of the receiver by simply thinking about the hand movement.


The sender, who is playing a computer game in which he has to defend a city by firing cannons, thinks about firing the cannon at various intervals throughout the game. The “Fire!” brain signal is sent over the Internet directly to the brain of the receiver, whose hand hits a touchpad that allows him to fire the cannon.


The accuracy among the pairs ranged from 25 to 83 percent, with errors attributed primarily to the sender’s failure to “accurately execute” the fire-command thought rather than the hardware. 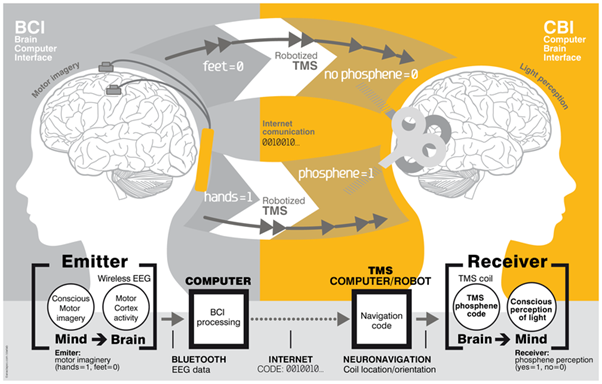 Although the applications for brain health are far in the future, the research could be a big step towards treating people with brain damage.