Minister urges use of M-sand for construction


Minister for Public Works, Karnataka, recently, appealed to the people to use manufactured sand (M-sand) for construction works instead of riverbed sand to prevent the environment from degradation.


The river sand is becoming scarce now. The most preferred alternative to river sand is the M-Sand got through processing the blue metal quarry dust. Fine and uniform granulation of quarry dust by floating it through pressurised water shower leading to reduction of impurities gives us M-Sand. M-Sand is dearer when compared to river sand during normal availability periods in regular markets.


M-Sand is manufactured sand. M-sand is crushed aggregates produced from hard granite stone which is cubically shaped with grounded edges, washed and graded with consistency to be used as a substitute of river sand. Manufactured sand is an alternative for river sand.


Why is it required?


Advantages of Manufactured Sand (M-Sand) are:


Voice vote valid only when nobody questions it


The Maharashtra Speaker’s decision to adopt the motion expressing confidence in the newly formed government by a voice vote has created a precedent that can be more controversial in situations in which the numbers are not as clear as in this case, even as the validity of the action itself remains a point of debate.


According to some, voice vote, which is provided for in the rules and procedures of legislative functioning, and widely used in parliaments around the world, is based on the presumption that the government has a majority in the House. The voice vote is valid only when nobody questions it.


Some are also of the opinion that Motions testing the majority of the government must have recorded voting as in the case of constitutional amendments which require voting even if there is no challenge.


Though trust and no-trust motions are like any other motion under legislative rules, whether clearer modalities must be laid down for these, remains an open legal question.


The Supreme Court’s attempt in 2005 to prescribe the modalities of a trust vote in Jharkhand created a conflict between the judiciary and legislature. The SC had directed that the Jharkhand Speaker take the trust vote on a particular date, video record the proceedings and submit the footage to the court. Moreover, the court also directed the Director General of Police and Chief Secretary to ensure that every member of the legislature was facilitated in the exercise of his vote. Even as the order of the SC created a controversy, on the appointed day, the Speaker ruled that voting was not possible due to commotion, effectively defying the judiciary.


The Congress-led Central government avoided a presidential reference, but the SC examined in detail the question of legislative privileges in the ‘cash for query’ scam, when Parliament’s right to expel members was questioned by those affected. The court upheld the expulsions, but rejected the Union government’s contention that the legislature procedures had absolute immunity from judicial review.


The Constitutional Bench of the SC said in its judgment: “The Rules which the legislature has to make for regulating its procedure and the conduct of its business have to be subject to the provisions of the Constitution. Mere availability of the Rules of Procedure and Conduct of Business is never a guarantee that they have been duly followed. The proceedings which may be tainted on account of substantive or gross illegality or unconstitutionality are not protected from judicial scrutiny.”


The confidence vote won by Mr. Fadnavis, the new CM of Maharashtra, is not immune to judicial review, though procedural irregularities are not sufficient grounds to challenge it. The question of the constitutionality of the government could well be.


Different methods of voting in the Lok Sabha:


The procedure regarding Voting and Divisions in the House is governed by article 100(1) of the Constitution and various rules under the Rules of Procedure and Conduct of Business in Lok Sabha. The various methods adopted for voting in the Lok Sabha are:


Govt. yet to push for safer male sterilisation


While the faulty sterilisation surgeries costing the lives of 11 women in Chhattisgarh, has grabbed national headlines, it turns out that there is a clear gender bias towards the procedure. Males hardly ever opt for it.


Data shows that, between 2008 and March 2012, the Centre under its Family Planning Insurance Scheme had to pay compensation for several botched sterilisation cases, of which 675 resulted in deaths, 438 complications and 18,887 failures.


Statistics show that despite female sterilisation being invasive, more time-consuming and risky, the government has failed to encourage male sterilisation, which is less invasive and safer and needs little post-operative care. Citing data, activists and health-care professionals are demanding that the Centre focus on male sterilisation and expand the bouquet of temporary contraception.


Family planning programmes in India have never been assessed. There is a lack of counselling and poor management of side effects for women who undergo permanent and temporary contraception.


In Karnataka, more than 99 per cent of those who underwent sterilisation during 2013-2014 were women, while men accounted for a miniscule 0.44 per cent. This is not only in keeping with the national trend, but it has been prevailing over the years.


Population stabilization is one of the key objectives of National Rural Health Mission (NRHM) launched in April, 2005. It aims at giving a major thrust to population stabilization. The Family Welfare Programme in India is voluntary in nature, which enables a couple to adopt the family planning methods, best suited to them according to their choice, without any compulsion or targets.


For achieving population stabilisation as envisaged by National Population Policy (NPP), comprehensive strategies aimed at convergence of service delivery at the village level for basic health care, family planning and maternal and child health related services; and empowerment of women for accessing health and nutrition services and promotion of male participation in Family Planning are being implemented as components of the State Programme Implementation Plan under National Rural Health Mission.


The following specific initiatives have been taken in pursuance of the objectives of NPP/NRHM towards population stabilisation:-


The agreement announced between the United States and India paves the way for full implementation of the WTO’s Trade Facilitation Agreement (TFA), the first multilateral trade agreement to be concluded in the history of the WTO.


At the WTO’s Ministerial Conference held in Bali last December, all its members, including the U.S and India, had agreed to a package of measures including a TFA and a commitment to find a permanent solution to the problematic agricultural subsidy caps. India’s position is that the WTO’s farm subsidies need to be updated as they are benchmarked to food prices of the 1980s.


Efforts to put the TFA in place were dealt a setback in July, when India refused to ratify, it raising concerns over the unsatisfactory progress on the WTO’s work on food security issues. The delay has now been overcome with the agreement with India in place for moving forward with the full implementation of the Bali package.


This proposal will seek to make open-ended the interim protection of a ‘peace clause’ that was agreed to at the Bali Ministerial last December. The clause safeguards support prices for farmers against the WTO’s limits on agricultural subsidies. India was in danger of breaching these subsidy caps.


India wants to make sure that this protection would be available in perpetuity, should a permanent solution to the problem of the WTO agriculture subsidy caps not be found. Whether the Bali Declaration provides that the ‘peace clause’ could be available beyond 2017 was open to interpretation. 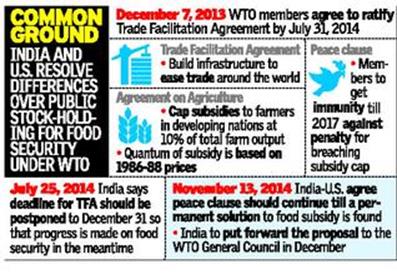 
The Trade Facilitation Agreement forms part of the Bali Package agreed by members at the Ninth Ministerial Conference in Bali. The Trade Facilitation Agreement contains provisions for faster and more efficient customs procedures through effective cooperation between customs and other appropriate authorities on trade facilitation and customs compliance issues. It also contains provisions for technical assistance and capacity building in this area.


The deadline to sign the agreement is July 31 and the deal has to come into force fully by 2015.


It is being believed, especially by the proponents of the agreement that deal could add $1 trillion to global GDP and also can generate 21 million jobs by slashing red tape and streamlining customs.


India fears that agreeing to the trade facilitation agreement (TFA) could compromise its own food security.


The problem with TFA runs in a clause that says farm subsidies cannot be more than 10% of the value of agricultural production. If the cap is breached, other members can challenge it and also go on to impose trade sanctions on the country.


India’s Food Security Act, which is binding on the government by law now, implies that the government will provide very cheap food to the most vulnerable part of the population at low prices. Apart from providing subsidies to the consumers, through the public distribution system, it also provides subsidies to the producers of food grains.


India which is home to about 25% of the world’s hungry, feels that it is a Government’s responsibility and duty to ensure availability of proper food to its people.