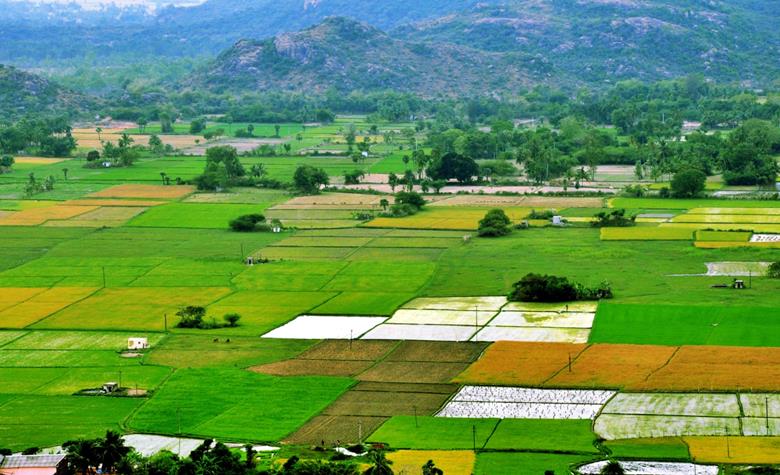 India is faced with a complicated situation as on one hand there is record production of cereals and on the other hand there have been trends of stagnant high inflation even when FCI godowns are overstocked. Many blame India’s minimum selling price policy for this situation. It has two unintended negative impacts; one is growth in agriculture is not dictated by demand of economy, other is persistent inflation. There are many other interventions which are isolated/unintegrated and lack broad vision of sector as a whole. Further, India has challenge to align domestic markets with international markets as exports of agriculture products can bring more prosperity to country side. It is said that 1% increase in Agro exports results in Inflow of 8500 crores in the sector. In this sense we can’t ignore WTO negotiations. These are to be negotiated while taking care of sovereignty and food security of India.

MSP initially was started as a safety net for farmers through a guarantee that if there produce is left unsold in the market, will be bought by the government. Another purpose was to incentivize farmer to produce more crops so as to ensure food security in India.


An ideal environment for this is one in which market prices are higher than support prices. When new crop comes to the market it will be sold at market prices and a situation was possible where on fulfillment of needs of consumers and industry, surplus is left with farmers. This will happen when production is more than demand. Such situation will result in crash of prices of agri products. It is this time when government should ideally intervene and purchase unsold stocks.


From very beginning these prices were skewed in favour of food grains mainly Rice and Wheat. Soon growth rate of production of these food grains outpaced Growth Rate of population and demand. This was time when government should have changed its policy to diversify Farm basket more toward, protein rich crops or horticulture, but this didn’t happen and patronage to Cereals continued. In 1990’s government started announcing only MSP which was also procurement price. This was so because by this time MSP was a big political plank and majority of farmer community was comfortable with Rice and Wheat due to their comparative high yields. If MSP was greater or equal to procurement prices or market prices, there is obviously no need of procurement prices. Since then MSPs has seen constant upswings.


Apart from MSP, center often announces additional bonuses on the crops. Over the MSP and bonus of Central Government, states also declare additional bonus. Problems are same but become aggravated. Recently government took step in this regard by – limiting procurement from states that declare additional bonus, to the level of requirement of PDS and other schemes. Not all quantity offered will be brought now.


Originally created as Agricultural Price Commission in 1960’s to recommend Minimum Selling prices for 11 crops and later it was renamed as CACP. It was a move to provide minimum floor price for these crops. It was felt that a government buying agency is prerequisite for effective implementation of MSP and Food Corporation of India was also created for procurement of foodgrains. Later for procurement of pulses and oilseeds, ‘National Agricultural Cooperative Marketing Federation of India Ltd’ (NAFED) created. So prices are recommended by CACP for all products, foodgrains are procured by FCI and pulse and oilseeds are procured by NAFED. However, horticulture, vegetables, fruits or dairy products have no such support.


As of now MSP is recommended for 24 crops under 5 groups viz. Kharif Crops, Ragi crops, Sugarcane, raw jute and copra.


For sugarcane instead of MSP, ‘fair and remunerative price’ is declared. It depends upon recovery percentage which varies from state to state. For other crops one MSP is declared for whole India. In beginning practice was to declare regional prices. This was so because Input costs and returns of crops vary from region to region. But later uniform MSP system was restored on ground that it alone could lead to comparatively efficient use of resources in line with their comparative advantage.


Other issue is of data on which commission relies. In this case ‘Directorate of Economics and statics’ gives inputs about cost of cultivation to CACP. This data is assimilated over a long period and there is time lag of about 2 years. So MSP fixed this year will be based on data captured 2 years back. This at times has given significant variations in computation of MSP. To remedy this CACP use an adjustment factor taking into account Inflation, but this is not effective.


MSP is based on economic criteria such as demand and supply situation, trends in domestic and international market prices, cost of production, inter-crop price parity, terms of trade between agriculture and non-agriculture sectors, trade policy in agriculture, effect on general price level, and so on.


It should be noted that ‘cost of production’ is just one of the factors taken into account and is not a sole factor. Few years back Swaminathan Committee recommended that MSP should be cost plus 50% mark up, but this was not implemented. Other Important factors which is considered is ‘demand in the economy’ this was added to terms of reference in 2009. As discussed in the beginning non sync of MSPs with demands of economy was realized and this step was taken.


However, methodology of CACP doesn’t have any specific weights attached to various given factors and MSP is influenced by Subjective discretion of members. CAG also criticized methodology on grounds of non-transparency. 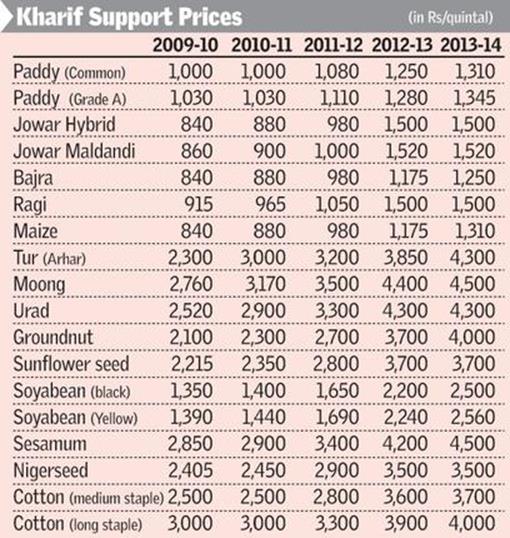 Note that Jowar, which is a coarse grain, has its MSP higher than Rice. Cultivated area under Jowar was on persistent decline and to arrest this decline its MSP was raised substantially in 2011.

MSP regime is often criticized on ground of –


Recent trends by NSSO indicates shift in pattern of food consumption from cereals to protein rich foods, but no such remarkable shift is seen in sowing or production patterns. For e.g. India is largest producer and consumer of pulses in the world, but still 25 % of the pulses consumed are imported.


This resulted in ‘Open ended procurement’ which means government can’t decide quantity it wants to buy. How much ever grains are offered by farmers to gov. has to purchase. So now government has huge stocks which are almost double the requirements for Buffer stock, PDS and Other government schemes such as Midday Meal Scheme.


Out of control Inflation


Only 1/3rd of the total cereal production is left for open market after government procurement and captive consumption by the farmers. This creates shortage in open market and abundance in government godowns.


Also, inflation in crops not covered under MSP is because of other reasons. As we have seen there is shift in consumption pattern toward non cereal foods, but no corresponding growth in production. As a result there is demand supply mismatch. So growth in non-cereal production is compromised in favour of crops that fetch higher yields, which is out of sync with market demand.


Any industry grows when it adapts to a competitive environment. If farmers get market signals from the market about upcoming trends of demands of consumers, total supply in economy, new technologies, export opportunities or import vulnerabilities, they will find out more profitable crops, technologies and will keenly adapt. Present system creates glut in market of particular crops. It leads to intensive farming year after year, which degrades soil. Farmers rely on political pressure to remedy their problems, instead of adapting to market. This all keeps private investment away for the sector.


Notwithstanding all this, it is unquestionable that our farmer needs support. Question under debate is what sort of support should farmer get? Currently farmers besides numerous other input subsidies are getting crop specific support. This means that our policy makers dictate agricultural product mix, which otherwise is domain of consumers. For this it is essential that –


The MFP gatherers are mostly poor who are unable to bargain for fair prices. Govt. of India has decided to introduce the scheme of “Mechanism for Marketing of Minor Forest Produce (MFP) through Minimum Support Price (MSP) and development of value chain”. The scheme is designed as a social safety net for improvement of livelihood of MFP gatherers by providing them fair price for the MFPs they collect.


The scheme has been started with following objectives


There is little doubt that subsidies and support to agriculture should be controlled and better targeted. WTO negotiations also claim to work towards this direction, but inherent conflicting and vested interest of few countries are too influential in WTO. Many allege that WTO’s agreement on agriculture is just a tool for neo-imperialism in hand of MNCs. Every country has different requirements and different product mix, so enough flexibility is must in any agreement. Further, right to food is a global movement and is guaranteed by numerous UN conventions. So, ensuring food security is a domestic concern of a nation, international community can just advice but can’t coerce other sovereign country. Thus, India has to made its expenditure much more effective, with dynamic policy and resist any outside pressure which is misdirected towards negative results for Indian people.


In last few years, due to global slowdown, there was very low Inflation (or even deflation) in International commodity prices. At same time prices in India was reeling under double digit food inflation. This indicates toward highly distorted agro economy not only in India, but globally. In WTO negotiation there should be constant pressure on developed countries to align their total subsidies to developing countries. System of Amber, blue, green box should be considered for change and preferably it should be done away with as it gives leeway to developed countries to carry on with distorting subsidies.