The country celebrates the National Education Day every year on 11th of November which is the birth anniversary of India’s great freedom movement leader Maulana Abul Kalam Azad, who was also India’s first education minister. It was 125th birth anniversary of maulana azad.

Maulana Azad was a key architect of education in independent India. As Minister of Education, he had a challenging task of conceiving an education system to develop a national spirit, an element that was missing from the colonial system. He introduced a system to inculcate a rational approach and spirit of enquiry in the education curriculum.

Maulana Azad is seen as an institution builder and University Grants Commission, Indian Institutes of Technology and other bodies owe their origins to his tireless efforts. To create socio-religious and cultural inter-linkages in India, he set up a number of institutions – Lalit Kala Academi, Sangeet Natak Academi and Sahitya Academi.

To mark the celebration of National Education Day, the following new initiatives were started by the Ministry of HRD-

The proposed SAARC Motor Vehicle Agreement has wider scope for movement of all types of vehicles across SAARC member States and will be a path breaking endeavour.

This agreement would facilitate Nepal-India bus services on reciprocal basis and a seamless movement of people from the two countries. It would promote tourism and people-to-people interaction. The following three routes have been identified for the bus service in the first instance:

In addition to the regular bus service along the three routes, the Motor Vehicle Agreement also provides for movement of private vehicles and non-regular passenger vehicles across the border. Such private and non-regular passenger vehicles would be entitled to use all established entry and exit points in the agreed upon framework envisaged under the Draft Agreement. It would promote tourism and people-to-people interaction.

The Union government has frozen the Budget subsidy for cooking gas at Rs. 20 a kg, raising the prospect of an increase in its price. If the market price of LPG goes up, as it normally does in the winter months, the government has the option of either passing on the increase to the consumer or making oil companies bear a greater burden of the subsidy.

The Centre will provide the fixed Budget subsidy irrespective of the size of the cylinder that LPG is sold in. The decision to go in for a fixed per-kg subsidy instead of per-cylinder is aimed at ensuring that the benefit of the subsidy reaches users of cylinders smaller than the standard 14.2 kg — typically migrants, students and labour and so on.

The decision has the added advantage of introducing transparency and predictability to the calculation of the fuel subsidy element of the fiscal deficit.

The Budget subsidy has been fixed at Rs. 20 a kg till March-end after which it will be reviewed on the basis of the market price. Against the current market price of Rs. 810 in Delhi for a 14.2-kg cylinder, the subsidised price is Rs. 417. 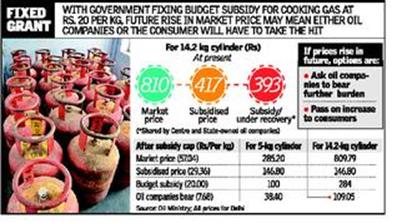 Epilepsy in India is highly stereotyped in terms of gender with 60 per cent married epileptic women facing divorce and the rest having to suffer through adversely affected relationships.

This was found in a nation-wide study conducted by the All India Institute of Medical Sciences released. The study showed that women with epilepsy suffer from under or no employment, higher anxiety, difficulty in finding partners, and increased risk of divorce compared with men with epilepsy.

The study also found that women with epilepsy in India become object of prejudice and are discriminated against, thereby leading to poorer quality of life.

Epilepsy is a group of neurological disorders characterized by epileptic seizures. Epileptic seizures are episodes that can vary from brief and nearly undetectable to long periods of vigorous shaking. In epilepsy, seizures tend to recur, and have no immediate underlying cause while seizures that occur due to a specific cause are not deemed to represent epilepsy.

The cause of most cases of epilepsy is unknown, although some people develop epilepsy as the result of brain injury, stroke, brain tumor, and drug and alcohol misuse. Genetic mutations are linked to a small proportion of the disease. Epileptic seizures are the result of excessive and abnormal cortical nerve cell activity in the brain.

The diagnosis typically involves ruling out other conditions that might cause similar symptoms such as syncope. Additionally it involves determining if any other cause of seizures are present such as alcohol withdrawal or electrolyte problems. This may be done by doing imaging of the brain and blood tests. Epilepsy can often be confirmed with an electroencephalogram (EEG) but a normal test does not rule out the disease.

Seizures are controllable with medication in about 70% of cases. In those whose seizures do not respond to medication, surgery, neurostimulation or dietary changes may be considered. Not all cases of epilepsy are lifelong, and a substantial number of people improve to the point that medication is no longer needed.

About 1% of people worldwide (65 million) have epilepsy, and nearly 80% of cases occur in developing countries. Epilepsy becomes more common as people age. In the developed world, onset of new cases occurs most frequently in infants and the elderly; in the developing world this is in older children and young adults, due to differences in the frequency of the underlying causes. About 5–10% of all people will have an unprovoked seizure by the age of 80, and the chance of experiencing a second seizure is between 40 and 50%. In many areas of the world those with epilepsy either have their ability to drive restricted or disallowed, but most are able to return to driving after a period of time without seizures.

A person is diagnosed with epilepsy if they have had at least two seizures that were not caused by some known and reversible medical condition like alcohol withdrawal or extremely low blood sugar.

The members of Asia-Pacific Economic Cooperation (APEC) members have agreed to initiate the formation of a free trade area in the Asia-Pacific — a vision steered by China, which competes with the Trans-Pacific Partnership (TPP) initiative of the United States.

APEC is an intergovernmental grouping that operates on the basis of non-binding commitments, open dialogue and equal respect for the views of all participants. Unlike the WTO or other multilateral trade bodies, APEC has no treaty obligations required of its participants. Decisions made within APEC are reached by consensus and commitments are undertaken on a voluntary basis.

During the meeting in 1994 in Bogor, Indonesia, APEC leaders adopted the Bogor Goals that aim for free and open trade and investment in the Asia-Pacific by 2010 for industrialized economies and by 2020 for developing economies.

To meet the Bogor Goals, APEC carries out work in three main areas:

Since its inception, APEC has worked to reduce tariffs and other trade barriers across the Asia-Pacific region, creating efficient domestic economies and dramatically increasing exports. APEC also works to create an environment for the safe and efficient movement of goods, services and people across borders in the region through policy alignment and economic and technical cooperation.

India has requested membership in APEC, and received initial support from the United States, Japan and Australia. Officials have decided not to allow India to join for various reasons. The main reason is that India does not border the Pacific Ocean, which all current members do. However, India was invited to be an observer for the first time in November 2011.