The Prime Minister, recently, launched “Jeevan Pramaan” – an “Aadhar-based Digital Life Certificate” for pensioners, in a move that could eventually benefit over a crore pensioners.


The proposed digital certification will do away with the requirement of a pensioner having to submit a physical Life Certificate in November each year, in order to ensure continuity of pension being credited into his account. The Department of Electronics and IT has developed a software application which will enable the recording of the pensioner`s Aadhar number and biometric details from his mobile device or computer, by plugging in a biometric reading device. Key details of the pensioner, including date, time, and biometric information will be uploaded to a central database on real-time basis, ultimately enabling the Pension Disbursing Agency to access a Digital Life Certificate. This will conclusively establish that the pensioner was alive at the time of authentication.


The earlier requirement entailed that a pensioner either personally presents himself before the Pension Disbursing Agency, or submits a Life Certificate issued by authorities specified by the Central Pension Accounting Office (CPAO).


The software application system will be made available to pensioners and other stakeholders on a large scale at no extra cost. It can be operated on a personal computer or a smartphone, along with an inexpensive biometric reading device. This facility will also be made available at Common Service Centres being operated under the National e-Governance Plan, for the benefit of pensioners residing in remote and inaccessible areas.


Taking cognizance of reports appearing in a section of Press about quality of vaccines for animals to control Foot and Mouth Disease (FMD) Minister of State for Agriculture has ordered to issue notice to three companies involved in manufacturing and supply of FMD vaccines and ordered constitution of a three member Committee to investigate the issue.


Foot-and-mouth disease is an infectious and sometimes fatal viral disease that affects cloven-hoofed animals, including domestic and wild bovids. The virus causes a high fever for two or three days, followed by blisters inside the mouth and on the feet that may rupture and cause lameness.


Foot-and-mouth disease (FMD) has severe implications for animal farming, since it is highly infectious and can be spread by infected animals through aerosols, through contact with contaminated farming equipment, vehicles, clothing, or feed, and by domestic and wild predators. Its containment demands considerable efforts in vaccination, strict monitoring, trade restrictions, and quarantines, and occasionally the killing of animals.


The virus responsible for the disease is a picornavirus, the prototypic member of the genus Aphthovirus. Infection occurs when the virus particle is taken into a cell of the host. The cell is then forced to manufacture thousands of copies of the virus, and eventually bursts, releasing the new particles in the blood. The virus is genetically highly variable, which limits the effectiveness of vaccination.


Humans can be infected with foot-and-mouth disease through contact with infected animals, but this is extremely rare. Some cases were caused by laboratory accidents. Because the virus that causes FMD is sensitive to stomach acid, it cannot spread to humans via consumption of infected meat, except in the mouth before the meat is swallowed. Symptoms of FMD in humans include malaise, fever, vomiting, red ulcerative lesions (surface-eroding damaged spots) of the oral tissues, and sometimes vesicular lesions (small blisters) of the skin.


Because FMD rarely infects humans, but spreads rapidly among animals, it is a much greater threat to the agriculture industry than to human health. Farmers around the world can lose huge amounts of money during a foot-and-mouth epizootic, when large numbers of animals are destroyed, and revenues from milk and meat production go down.


Like other viruses, the FMD virus continually evolves and mutates, thus one of the difficulties in vaccinating against it is the huge variation between, and even within, serotypes. FMD vaccines must be highly specific to the strain involved. Vaccination only provides temporary immunity that lasts from months to years.


Many early vaccines used dead samples of FMDV to inoculate animals, but those early vaccines sometimes caused real outbreaks. On June 18, 1981, the US government announced the creation of a vaccine targeted against FMD, the world’s first genetically engineered vaccine.


Epidemics of FMD have resulted in the slaughter of millions of animals, despite this being a frequently nonfatal disease for adult animals (2-5% mortality), though young animals can have a high mortality. The destruction of animals is primarily to halt further spread, as growth and milk production may be permanently affected, even in animals that have recovered. Due to international efforts to eradicate the disease, infection would also lead to trade bans being imposed on affected countries.


New draft policy on civil aviation proposes enhanced regional air connectivity, rationalisation of jet fuel costs along with broader institutional reforms like corporatisation of the Airports Authority of India (AAI) and development of a road map for Air India’s future.


It aims to develop a transparent policy in which regulations for the Civil Aviation sector would be more meaningful.


The six metropolitan airports at Delhi, Mumbai, Chennai, Kolkata, Bangalore and Hyderabad would be developed as major international hubs and would in future be the main access points for international travel to and from India. In future a “hub-and-spoke” model would be followed, which would also facilitate the development of regional networks and air connectivity as a whole. The existing bilateral agreements with foreign bilateral agreements will be designed in such a way as to facilitate the hub-and-spoke model.


The Draft puts emphasis on rationalizing the cost of Aviation Turbine Fuel (ATF). Due to high rates of taxes, the cost of ATF in India is 40 to 45% higher than the international costs. Steps will be taken in association with the Ministry of Finance and State Governments to rationalize the rate of taxes so that costs are competitive.


An Expert Committee will be constituted to develop a future roadmap for Air India. Airports Authority of India will be corporatised, followed by listing in the Stock Exchanges, in order to improve efficiency and transparency. Pawan Hans Ltd. will be listed in the Stock Exchanges with the same objective. A mission mode project will be set up to ensure that organizations under the Ministry are competitive in terms of efficiency and costs.


Government’s objective will be to provide optimum air connectivity to all regions, subject to commercial viability. A special package will be developed for the North-Eastern Region to improve air connectivity and provide linkages to remote locations.


The functioning of Ministry of Civil Aviation and the offices under the Ministry will be digitized to improve efficiency and transparency. The service and clearances to be given by different agencies will be made online. Electronic procurement systems will be strengthened to ensure transparency and accountability. 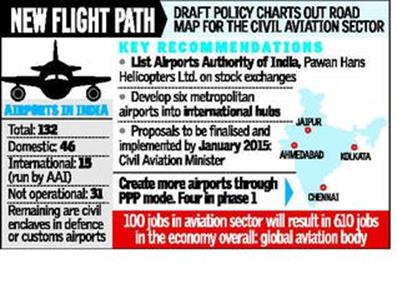 
Mr. Singh had offered, through his poetry, a rare assimilation of rhymes and lyrical prose, exploring both the realms of reality and fantasy with equal felicity. A poet of unique stature, his approach is not only sensitive to modern aesthetics but also to traditional rural communities while at all times being committed to the celebration called life.


Along with the Sahitya Akademi Fellowship, it is one of the two most prestigious literary honours in the country. The award was instituted in 1961. Any Indian citizen who writes in any of the official languages of India is eligible for the honour.


It carries a cheque for 11 lakh rupees, a citation plaque and a bronze replica of Saraswati, the Indian goddess of knowledge, music, and the arts.


As of 2014 among all Jananpith award winners, ten have been writing in Hindi followed by eight in Kannada, five each in Bengali and Malayalam, four each in Oriya and Urdu and three each in Gujarati, Marathi and Telugu and two each in Assamese and Tamil.


Starting with the Bengali writer Ashapoorna Devi in 1976, seven women writers have won the award so far.


Tightening norms for non-banking financial companies (NBFCs), the Reserve Bank of India has raised the capital adequacy requirement and the net owned fund limit, among others, with an objective to mitigate risks in the sector.


Non-bank financial companies (NBFCs) are financial institutions that provide banking services without meeting the legal definition of a bank, i.e. one that does not hold a banking license. These institutions typically are restricted from taking deposits from the public depending on the jurisdiction. Nonetheless, operations of these institutions are often still covered under a country’s banking regulations.


Difference between Banks and NBFCs:


NBFCs lend and make investments and hence their activities are akin to that of banks; however there are a few differences as given below:


ii. NBFCs do not form part of the payment and settlement system and cannot issue cheques drawn on itself;


iii. deposit insurance facility of Deposit Insurance and Credit Guarantee Corporation is not available to depositors of NBFCs, unlike in case of banks.


A record 21 species of shark, ray and sawfish were added to the list. The polar bear, which is found in the Arctic, and the widely-distributed Cuvier’s beaked whale made the list too. Also newly protected are the red-fronted gazelle, common in Africa, and the great bustard, found in Europe and Asia.


More than 900 experts from 120 countries met for the six-day meeting, approving all but one proposed species to be included on the protected wildlife list. The African lion did not make the final cut because there was not enough information from the countries on where it lives.


It is an environmental treaty under the aegis of the United Nations Environment Programme, CMS provides a global platform for the conservation and sustainable use of migratory animals and their habitats. CMS brings together the States through which migratory animals pass, the Range States, and lays the legal foundation for internationally coordinated conservation measures throughout a migratory range. It aims to conserve terrestrial, marine and avian migratory species throughout their range.


As the only global convention specializing in the conservation of migratory species, their habitats and migration routes, CMS complements and co-operates with a number of other international organizations, NGOs and partners in the media as well as in the corporate sector.


CMS Parties strive towards strictly protecting Migratory species threatened with extinction, conserving or restoring the places where they live, mitigating obstacles to migration and controlling other factors that might endanger them. Besides establishing obligations for each State joining the Convention, CMS promotes concerted action among the Range States of many of these species.


In this respect, CMS acts as a framework Convention. The agreements may range from legally binding treaties (called Agreements) to less formal instruments, such as Memoranda of Understanding, and can be adapted to the requirements of particular regions. The development of models tailored according to the conservation needs throughout the migratory range is a unique capacity to CMS.


There are, currently, 119 Parties to the Convention.