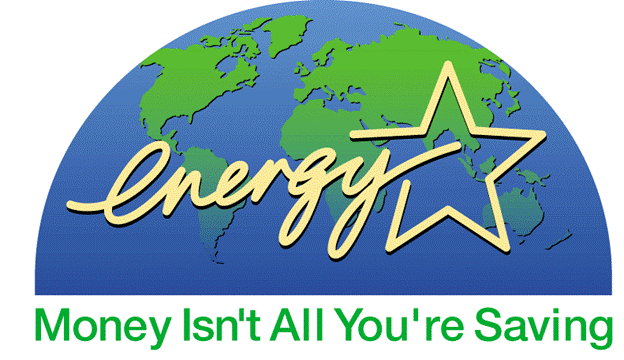 Energy Intensity of an Economy and Energy efficiency

It is obvious that it’s better to keep energy consumption at minimum by adopting energy efficient technologies. This is inherent part of good economics as it calls for maximum output by consuming minimum resources. This will reduce electricity bills of households, industry and of government too. This in turn will result in higher disposable Incomes, increased savings, capital formation and higher demand. It will save disproportionate investment of capital in power sector, which could be used for other more appropriate ends.

Energy, as we know, has huge environmental costs. So not saving energy where we can is dangerous. Saving energy results in avoiding emissions of millions of tons of greenhouse gasses annually. If this is not enough, then finally fact that conventional resources are depleting fast leaves no room for complacency over this issue.


Different countries have different Energy Intensity and it depends upon wide range of factors such as technology, share of particular sector in Economy, Government’s investment in power infrastructure.

If share of service sector is more in GDP, then energy intensity will be lower. Governments all over the world intervene in this issue by making policies toward efficiency. It is hence, hard to compare energy intensity of two economies as determinants are different. But still there are always lessons that can be learnt and energy efficiency Policy and technology can be imported and replicated in domestic economies. In this context India has borrowed heavily from western countries like USA and Germany. 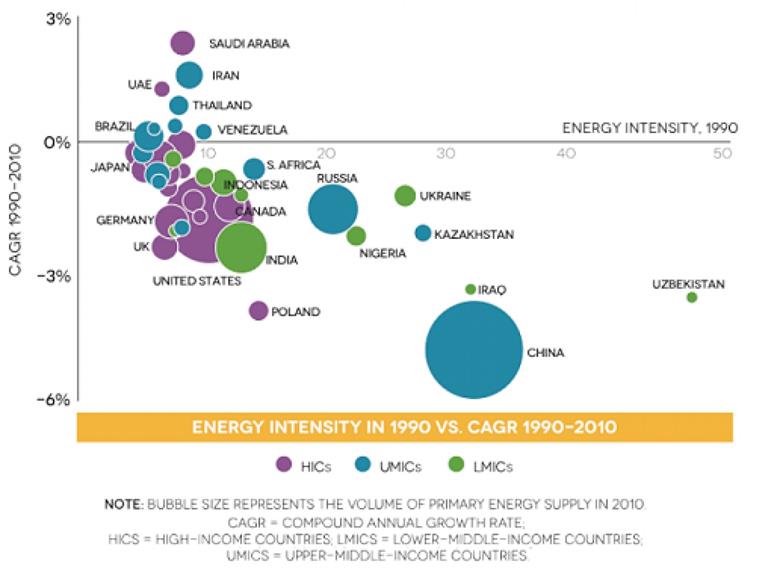 To lower energy intensity a comprehensive approach which addresses issues beginning from Generation of power, transmission, distribution and finally collection of real costs from the consumers is imperative. 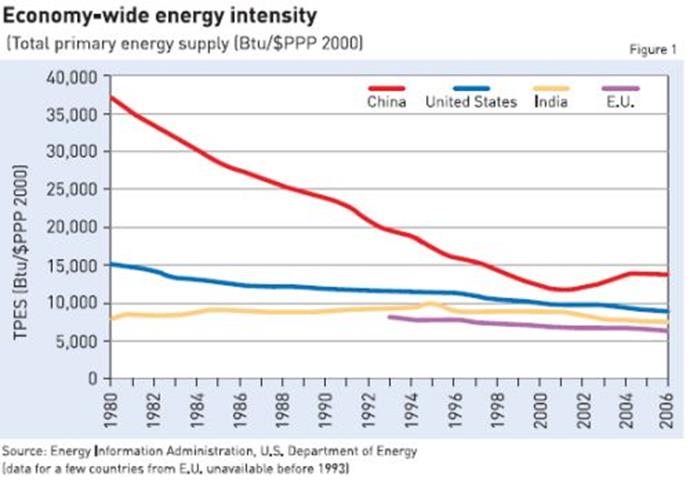 India’s energy intensity has come down rapidly in past couple of decades and this fall continues. This is mainly because of following reasons –


But most contentious issue in decreasing energy intensity is of affordability. Energy efficiency options are expensive and it is hard to convince a user of traditional energy methods to switch over to new one. This is possible only if he is made understand benefits which will accrue to him on the investment.


However, increase in demand is unavoidable. Still significant proportion of Indians doesn’t have access to electricity. Universal electrification is major part of Inclusive growth which aims to provide decent standard of living to all. Hence, increase in investment in energy is obviously desirable and unavoidable.

In this backdrop, we know energy resources are limited and this is big challenge and opportunity simultaneously. It is opportunity in sense that vast amount of infrastructure is yet to be built. This provides us opportunity to adapt to new challenges. 70 % of all buildings which will be there by 2030 are yet to be built. So, new commercial and civil buildings should be more energy efficient. In contrast developed countries have already conventional infrastructure in place and they need to modify it, which is bigger challenge.

Having said this, it is extremely hard to seize this opportunity as energy efficiency is costly for e.g. CFLs are expensive and so are energy efficient air conditioners and refrigerators. This matters across households and industries.


More specifically for industries, it is hard to adapt to new technology. This adaptation disrupts the ongoing production and consequently costs involved are higher. Costs in addition to expensive equipments include losses of production foregone. So industry needs to be provided with existing examples of successful and beneficial application of new technologies.

Another issue is of split incentives. Costs and benefits of adopting energy efficiency accrue to different people. A builder for example, if spends more money on energy efficiency, then there is no guarantee that customer will pay him more price compared to non-energy efficient building.

This problem was conceived by government and Energy Conservation Act was passed in 2001.


b) Star Ratings for diesel gensets and


1st government building to get 5 star rating is ‘International Centre for Environment audit & sustainable Development’ near Jaipur. This was setup by CAG last year and seeks to establish global center for excellence to improve accountability and governance in area of environment & sustainable development.

To achieve rapid progress in this field it is essential that choice availability, Information, financial capacity – all should be there to make a choice in favor of energy efficiency at micro level. Any new innovation is made popular by 1st few successful transactions and here government attempts to handle the situation by various policy. Thereafter, examples of these transaction and their benefits attract more and more users.


Power sector reforms begun in 1991 with LPG reforms when private investment was allowed. That time installed capacity in India was 70000 MW which now stands at 254000 MW and growing. Currently 29% of power is being generated by private sector. On back of Rajiv Gandhi Grameen Vidyutikaran Yojna, electrification rose from 59 % in 2000 to 74 % in 2010. Share of renewable energy in 1990 was only 18 MW which rose to about current 42000 MW.


But time and again transmission and distribution sector has underperformed. There are recurring losses which are then bailed out by government (2001 bailout totaled 1.5 % of GDP). In pre liberalization era, recovery from customers was quite lower than costs. This got improved after reforms but still there are widespread power theft and transmission & distribution losses.


Formed in 1948, it now derives its powers from Electricity Act, 2003. It has central role in formulation of policies and programs for development, planning and coordinating the electricity sector. It makes regulations and standards for construction of power plants, power lines, and connectivity to grids, Installation and operation of the meters, concurrence of hydroelectric schemes


This act delicensed power generation and freely permits captive production of power. Further, it attempts to streamline transmission and distribution of the power. Transmission, however, it solely keeps for government companies.


Other reforms under the act are: mandatory metering of electricity supplied, stringent provisions to avoid power theft, permits standalone (offgrid) systems for generation and distribution in remote areas etc.


This board was constituted in 2004 with HQ at New Delhi to hear appeals against orders of regulatory commissions.


The Mega Power Policy was introduced in November 1995 for providing impetus to development of large size power projects in the country. For a thermal power project to be awarded the status of a mega power project it has to have a generation capacity of at least 1,000MW, In the case of hydropower projects, the threshold capacity is 500MW.


Mega power policy allows a tax holiday for 10 years and waiver from paying customs duty on equipment imports to mega projects. In 2009 the policy was been revised as New Mega power policy to make investments more attractive and make it easier for the government to achieve its target.


It mandated power ‘distribution’ reforms for states by privatizing this function in cities having population more than 1 million.


Latter Ministry realized that in order to promote self-sufficiency in domestic equipments manufacturing, custom duties on Imports needs to be imposed. So sow new plants has to pay custom duty on imports and this policy stands withdrawn for new projects.


GOI in 11th FYP came out with the policy of power to all. This was to be achieved by Installation of 14 UMPPs with capacity of 4000 Mw each. This is too allowed through bids with 25 year ‘power supply agreement’. Plants will either have captive coal mines or Captive coal import terminal.
Their maximum Debt equity ratio of investment can be 70:30. So far only 4 projects have been sanctioned – Mudra – Gujrat (Coal Import Terminal), Sasan – MP, Tillaya – Jharkhand, Krishnapattanam – Andhra Pradesh Power finance corporation ltd will make ‘Special purpose vehicle’ for each project . SPV will then secure clearances, acquire land etc. on behalf of owner. It will also select developer on the basis of ‘competitive bidding’.


These will be based on ‘supercritical technology’ which consumes less coal than normal thermal plants.


100 % FDI through automatic route is allowed in Power Generation, Transmission and Distribution. Trading in power is also allowed.


Power grid is ‘navaratna’ PSU charge with responsibility of Interstate transmission of electricity. It overseas, manages and maintains all the 5 grids of the country. Late last year, southern grid was synchronized with rest of India which will enable transmission of surplus power. All other regional grids were already synchronous. Inter-regional transmission capacity is currently around 32 GW which will be enhanced to 66 GW by end of 12th five year plan. For this there are plans for ‘High capacity Power Transmission Corridors’ with investment of Rs 10000 crore over the plan period.


PGCIL is also present in telecom sector and owns Broadband Telecom Network of about 30000 Km which connects major cities. It also took up responsibility to build prestigious ‘National Knowledge Network’ which will connect Knowledge centers like IITs, IISs all over the country. It is also participant in ‘Nation Optical Fiber network’.


Company also is dominant player in building SAARC GRID. Present connections are there with Nepal, Bhutan and Bangladesh. Feasibility studies are going for underwater Indo- Sri Lanka grid connection. Indo Pak connection is also under discussion. It provides consultancy to various other domestic clients and International Clients from 14 countries.


It has leadership role in developing smart grid in India so that all segments (renewable with conventional) of power generation will be integrated in National Grid.
The project is under implementation and interim Smart Grid Control Centre at Puducherry has already been established with provision of advanced metering Infrastructure (AMI) solution and other functionalities like Outage Management System, Demand Response, Micro grid etc. are being taken up in a progressive manner.


A Village is considered to be electrified if –


To control AT&C losses GOI initiated ‘Accelerated power development and Reform program’ in 2001. It is to be done by strengthening Transmission and Distribution Infrastructure and substations. Its aim is to reduce AT & C losses at sub 15 % levels. But so far no substantial progress is there as losses are still as high as 29 %. In north AT&C losses are higher than north. Further they are disturbingly high in political sensitive area (constituencies of Political bigshots). In developed countries these losses remain around 4-5%. They are 7% in china.


As per the provisions of the Electricity Act, 2003, Special Courts to deal exclusively with cases of electricity theft have been set up in 23 states


As result of these losses, financial health of some state distributing utilizes is a big concern. subsidy dependence for the state-owned distribution utilities for Year 2014-15 is estimated in the range of Rs 7,20,000 crore. To make distribution free from political interference and in order to make possible recovery of reasonable electricity prices from consumers PPP model is being followed. Under this franchisee model is followed and Private companies are given this function and are allowed to recover market based prices. This model is there in big cities and states increasingly are adopting this model. Most of the private companies got success in bringing down AT&C in their areas. 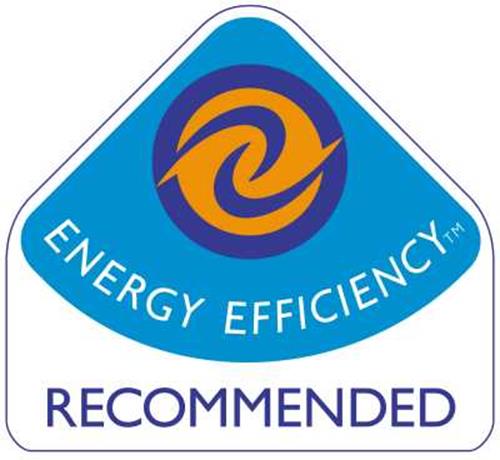 Reducing energy intensity is primary way to achieve efficiency and it calls for power sector reforms. Apart from these issues, there is need to promote awareness among public. India is big country and energy saved by each Indian can sum up to give power equal to what is being produced by numerous polluting thermal power plants. It is clear that in near future we can’t consume resources as developed countries do, but if we compare upper strata (say 1% of rich Indians) we’ll find their energy consumption similar to western countries. On the other hand about 25 % of India doesn’t have access to electricity. Hence, to narrow difference between two extreme is a formidable challenge and dream of ‘inclusive growth’ lies only here.