Every year 16th October is observed as World Food Day to mark the founding of the Food and Agriculture Organisation (FAO) of the United Nations (UN). The intention of observing this Day is to raise public awareness about the plight of the hungry and malnourished people all over the world and initiate comprehensive action to tackle and mitigate the menace of malnutrition and hunger.


The theme selected for this year’s World Food Day is Family Farming: “Feeding the World, Caring for the Earth”.


A Memorandum of Understanding was signed between the two countries on Cultural Cooperation which will form the bulwark of the India-UK cultural relations for the period 2014 to 2019.


The priorities set by the two governments include enhanced efforts for preservation of monuments, preservation of Buddhist heritage, infrastructure development at archaeological sites, enhanced people to people contact through Festivals of India abroad for projection of India’s soft power diplomacy and promotion of tourism, improved records management in Government and the National Missions on Libraries and Manuscripts.


BHAVINI, a public sector undertaking of the Department of Atomic Energy, has built the PFBR at Kalpakkam, 60 km from Chennai. The PFBR uses plutonium-uranium oxide as fuel and liquid sodium as coolant.


It is a 500MWe fast breeder nuclear reactor presently being constructed in Kalpakkam, India. The Indira Gandhi Centre for Atomic Research (IGCAR) is responsible for the design of this reactor.


The reactor will use sodium as the coolant. It shall generate electrical power of 500MW. It will make use of MOX fuel, a mixture of PuO2 and UO2. A fuel burnup of 100GWd/t is expected. It will have an operational life of 40 years.


The fact that PFBR will be cooled by liquid sodium creates additional safety requirements to isolate the coolant from the environment, since sodium explodes if it comes into contact with water and burns when in contact with air. Another hazard associated with the use of sodium as a coolant is the absorption of neutrons to generate the radioactive isotope 24Na.


The PFBR will use plutonium-uranium oxide as fuel, and liquid sodium as coolant. If sodium comes into contact with water, it will catch fire. At Fukushima in Japan in March, four reactors’ nuclear fuel core could not be cooled because the station suffered a black-out after the tsunami, which also knocked out the pumps and the diesel generator sets. So water could not be pumped for cooling the fuel core.


In the case of sodium fire in an open place, sodium bicarbonate — a dry chemical powder — would be used to douse the fire. If sodium caught fire in an enclosed place, nitrogen would be injected to extinguish it. Sodium fire is milder than oil catching fire.


After the Fukushima accident, two committees reviewed the safety at the Atomic Power Station (MAPS) at Kalpakkam. Mobile power generation sets had been procured. MAPS’ emergency core cooling equipment was relocated to a higher level after the 2004 tsunami.


About Atomic Energy Regulatory Board:


The mission of the Board is to ensure that the use of ionizing radiation and nuclear energy in India does not cause undue risk to health and the environment.


Currently, the Board consists of a full-time Chairman, an ex-officio Member, three part-time Members and a Secretary.


Euromoney is an English-language monthly magazine focused on business and finance. Euromoney publishes the Euromoney Awards for Excellence, with an annual awards event recognising the top banks in the world. It also publishes awards for Central Banker of the Year and Finance Minister of the Year.


An experts’ committee, headed by Ramesh Chandra, constituted by the Union health ministry to review the Cigarettes and Other Tobacco Products Act (COTPA), 2003, has come out with various recommendations, including a ban on the sale of loose cigarette sticks, a ban on advertisements of tobacco products at points of sale and heftier fines on violations of the Act.


Recommendations made by the committee: 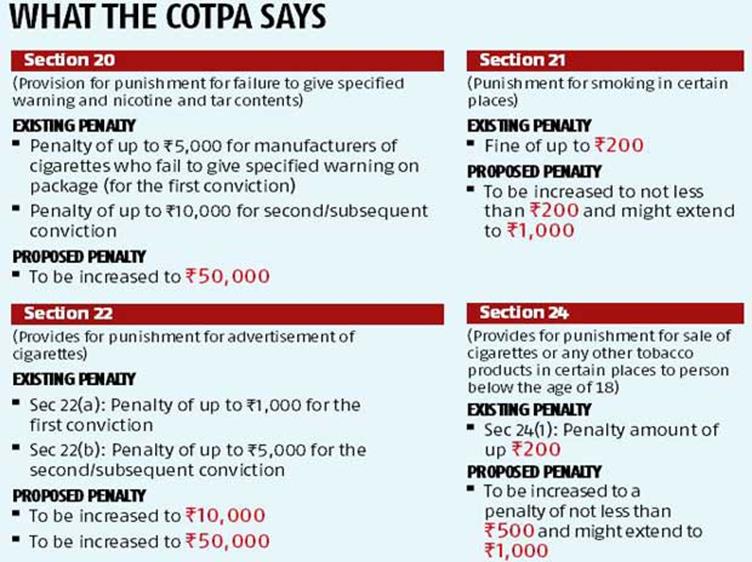 
It was enacted mainly to discourage the consumption of Cigarettes and other Tobacco products through imposing progressive restrictions and to protect non-smokers from second hand smoke.


The Key provisions under the Act include:-


Researchers from the Massachusetts Institute of Technology (MIT) have questioned the technical feasibility of the ‘Mars One’ project that aims to establish the first human colony on the Red Planet by 2025.


‘Mars One’ is a non-profit organisation based in the Netherlands that has put forward conceptual plans to establish a permanent human colony on Mars.


The mission plans to initially send four astronauts on a one-way trip to Mars where they would spend the rest of their lives building the first permanent human settlement.


The Mars One mission plan consists of cargo missions and unmanned preparation of a habitable settlement, followed by human landings. In the coming years, a demonstration mission, communication satellites, two rovers and several cargo missions will be sent to Mars. These missions will set up the outpost where the human crew will live and work.


The mission design takes into account the expansion of the human colony where a new crew will arrive every two years. Mars One will select and train the human crew for permanent settlement.


Mars One has received a variety of criticism, mostly relating to medical, technical and financial feasibility.


The satellite, which is similar in composition to its predecessors 1A and 1B, carries navigation and ranging payloads. It will play a vital role in the IRNSS operations right from guiding drivers on city roads to aerial navigation, disaster management, mapping and surveillance activities.


The IRNSS with a 1500km range will make India self-reliant on navigation and surveillance from outer space as it is expected to cover the Asian region. It will be utilized for two services — standard positioning service (SPS) extended to all users and restricted service (RS) which will be encrypted.


IRNSS is an independent regional navigation satellite system being developed by India. It is designed to provide accurate position information service to users in India as well as the region extending up to 1500 km from its boundary, which is its primary service area.


IRNSS will provide two types of services, namely, Standard Positioning Service (SPS) which is provided to all the users and Restricted Service (RS), which is an encrypted service provided only to the authorised users. The IRNSS System is expected to provide a position accuracy of better than 20 m in the primary service area.


IRNSS comprises of a space segment and a ground segment. The IRNSS space segment consists of seven satellites, with three satellites in geostationary orbit and four satellites in inclined geosynchronous orbit. IRNSS-1A, the first satellite of the IRNSS constellation, has already started functioning from its designated orbital slot after extensive on orbit test and evaluation to confirm its satisfactory performance. 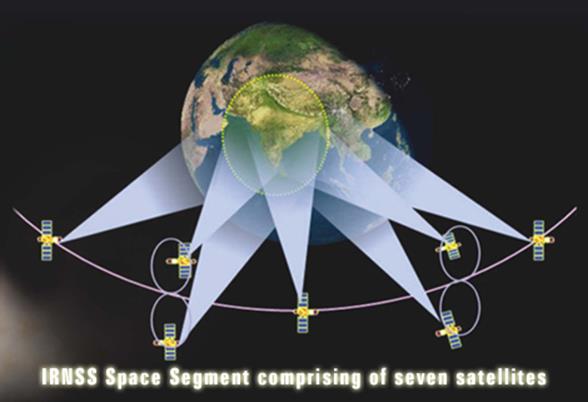