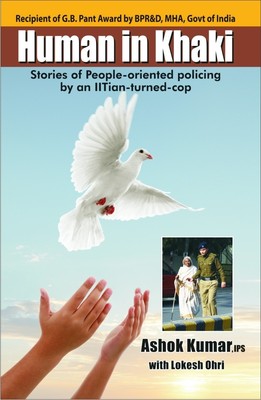 “Human in khakhi” is a book written by an IPS officer who joins the force with sole moto to serve the country. Writer belongs to a small village in Haryana but somehow manages to get into IIT Delhi. Entry into IIT Delhi exposes him to two different type of India, one he has experience in his village and other he experiences in IIT. He also notices environment in IIT is very competitive and everybody is busy in shaping their career by planning for GRE, CAT, MAT, MS etc. Most of the people are ready fly out of the country either for job or for higher studies and thus are least concerned about the other part of India which is trapped in villages. Writer having seen both types of India wants to bridge the gap between these two because he still identifies himself with rural India. He realizes he can best do this by going to civil services. He was also attracted to civil services as it the only service where one can see their work directly affecting life of people and offer immense opportunity to serve people especially those who need government support most, i.e. most downtrodden. With this idealistic thought he joins Indian Police Services only to get many surprises. The first surprise he get in LBSNAA, Mussoorie itself where initial training of IAS, IPS and IFS officers takes place.  He was surprise to find out that most of his fellow batch mates had joined services for power, money and prestige that this service offer, not to serve.  He also encounters thought like these idealistic principles does not work in real life and meant only to be vomited in interview. But he refuses to toe the line and remains firm on serving his countrymen with best of his abilities. In this book writer share his own real life experience an IPS officer in the form of a series of anecdotes.

As name suggests this book tries to emphasize that a policeman/policewoman (or person in Khakhi) is also a human being. A policeman also derives pleasure by helping others, has heart and not completely emotionless. It is because their job demands a tough attitude and they constantly deal with harden criminals they are forced to become a bit tough and rough. He tries to dispel the myth that police is always ruthless, brutal and corrupt or myth that to be a policeman mean to be very tough and heartless. Through his own real life story as an IPS officer he tells how a humane policing is possible.  It also dispels myth that an IPS officer is severely constrained by politicians so hardly can do much for the people. According to writer though there are political constraints but even within this constraint and within one’s power you can do a lot to help people and make their life better.

Writer discusses about two types of IPS officers.  “Raja officers” who merely communicate with his immediate junior, does not go to field visits or scene of crime and generally inapproachable by common man. Junior officers are very happy under such senior and the can do whatever they want without any question from their senior. Other being, Sakht officer or kadak officer, the one who goes to field visit, visit scene of crime personally, know functioning of the police very well. These type of officer and feared but respected. Writer tells that he wanted to be a in later category (sakth officer) and for this he start visiting scene of crime and get personally involved in the cases. In process of doing this he realizes how little effort on the part of an officer can give much needed relief to the common man.   He adopts humane, sensitive and empathetic attitude towards people. He describes how he could help deliver justice to a rape victim, busted organized land mafia, acted firmly against caste panchayat which had allowed a woman to be raped by 16 men in the name of delivering justice etc. He discusses how his sensitive and humane approach comes handy for wining over support of the people when he was posted in terrorism threatened area of terai region near Nainital, Uttarakhand. He also discusses how immense satisfaction and pride he derived when he could wipe tears of the hapless person.

Apart from this writer has thrown some light on following things:

Ineffective Complain System, which he notices during his first posting at Allahabad where complaint against a particular officer end up in his/her own hand to be addressed or some other his near colleague.

Tout Culture in police station where some local dalal act as an intermediary between police and common man. He also discusses how he could easily overcome this culture when he was posted at a thana during his field training.

Corruption at thana level and how some time police exploit both party in dispute and due to this exploitation common public fear approaching even junior most policeman.

Inertia in the system, tendency to resort to unethical means in the name of saving image of police department and displaced sympathy to save corrupt or wronged colleagues.

Finally, writer discusses some myth and realities of police:

Myth: Police is most corrupt organization

Realities: other organization or functionaries of the government are at least as corrupt as police, if not more. It is because police is directly involved with public and common man have to directly bear the brunt of police corruption it seem more corrupt. Many functionaries siphon off much more public money from government exchequer but since burden of these is not directly fall on common people they don’t realize extent of corruption in other places.

Realities: Job of police is most difficult and challenging. On an average a policeman work 12-13 hours daily as against 8 hours norm for others.

Myth: Policemen are accomplices in the crime. They everything about the criminal, they have contact with them.

Realities: No police officer wants to perpetuate crime in his area, according to writer. Yes, since police has to deal with criminal they know them but that does not mean that they are accomplice in crime.

Why a civil services aspirant should read this book?

1.       A good book to know about functioning and challenges of an IPS officer.

2.       Books helps to guide prospective IPS officer how they could be a better and helping officer.

4.       Will help in interview to answer situation based questions, like you come to know involvement of your junior officer in certain false implication of an innocent person ; you want to proceed but your other staff is suggesting you against the proceeding as it will tarnish the image of police department, then what you should do?

Book discusses only some of the chosen success stories and failures are not discussed. This gives very rosy picture of police. It does not discuss how corruption at bottom level many a time linked to top level. It does not discuss the nexus between politician, police and criminal and ways to overcome these nexus. One may say that writer being a policeman may be biased in favor of police.

Language is very simple and a whole book is in the form of short stories so you will not be bored any time during the journey through this book.  I am sure you will enjoy reading this book.