APPOINTMENT OF JUDGES TO THE SUPREME COURT– PRESENT SYSTEM

Provided that in the case of appointment of a Judge other than the Chief  Justice, the Chief Justice of India shall always be consulted.”

Clause (2) of Article 124 speaks of ‘consultation’, whether it be with the Chief Justice of India, Judges of the Supreme Court or with the Judges of the High Court. The expression is not “concurrence”.

Practice followed till 1981: A practice had developed over the last several decades according to which the Chief Justice of India initiated the proposal, very often in consultation with his senior colleagues and his recommendation was considered by the President (in the sense explained hereinabove) and, if agreed to, the appointment was made.  By and large, this was the position till 1981.

Modelled on the U.K. Judicial Appointment Commission- Why?

There are also serious defects in the proposed legislation.

1) The JAC has the Chief Justice of India and two senior most judges. Then there is the Law    Minister and two “eminent persons,” bringing the non-judicial component to three out of six members.

3) The JAC is vested with the power to recommend persons for appointment of the Chief Justice of India — which means the rule of seniority has been given the go-by.

4) To seek the opinion of the government and the Chief Minister of the State in the appointment process again raises the risks of political appointments — which in turn jeopardises independence.

5) Under the JAC bill, the JAC has been entrusted with the formidable task of not only appointing 31 SC judges, but over 800 judges in 24 high courts.

6)  Under the JAC bill, the JAC would have the onerous task of appointing SC judges as well as the high court.

7) A serious lacuna in the bill is that the selection of judges is to be determined by regulations made by the commission to “shortlist” candidates.

8)  In the UK, next to the consideration of merit for appointment as a judge, the JAC considers diversity of appointments with respect to appointment of women and judges from different communities.

CHINA’S PEACEFUL RISE – IS IT SO?

China’s peaceful rise or sometimes referred to as China’s “peaceful development” is an official policy in China under the leadership of Hu Jintao. The term was implemented to rebut against the “China threat theory”.  As China emerged as a great political, economic and military power, China wanted to ensure other countries that its rise will not be a threat to peace and security. China implements this policy by internally harmonizing China’s society and externally, promoting a peaceful international environment. It seeks to characterize China as a responsible world leader, emphasizes soft power, and vows that China is committed to its own internal issues and improving the welfare of its own people before interfering with world affairs. The term suggests that China seeks to avoid unnecessary international confrontation.

For roughly a decade, the Chinese government has spared no effort in trying to convince the rest of the world that china’s rise will be peaceful. The issue of China’s peaceful rise has always been remained a hot topic of debate between the realists and Liberal minded intellectuals.

Realists argue that China would behave like a traditional great power (that means may be she use its  financial and military power to dominate others) Liberal minded analysts hope that, given the right incentives, such as the economic benefits of globalization, China will behave responsible and become a stakeholder in the existing international order.

With the most recent escalation of tensions between China and Japan over the ownership of a group of small uninhabited islands in the East China Sea, there is little doubt that advocates of China’s peaceful rise are losing the debate. What makes the latest round of escalations special is the way Beijing chose to challenge Japan’s sovereignty claims over the Senkaku Islands, as Japan calls them (they are called the Diaoyu in China).

At the heart of the dispute are eight uninhabited islands and rocks in the East China Sea. To be sure, this particular dispute began in 1972, when the United States handed over administrative authority (but not legal ownership) to Japan. For four decades, China and Japan had adhered to a tacit agreement over the status of the islands: Japan would retain administrative control and claim sovereignty, and China would contest the sovereignty but not challenge Japan’s administrative control.

This understanding broke down in late 2012 when Tokyo was forced to “nationalise” the islands in order to prevent an extremist right-wing leader from purchasing some of the islands from their private owners, a development the Japanese government thought would lead to a confrontation with Beijing. China regarded this as a step tantamount to formally establishing sovereignty claims over the islands.

As part of its response, Beijing has gradually escalated. After repeatedly sending ships and planes into the territorial waters and airspace of the islands to challenge Japanese claims of exclusive administrative control, On November 23, 2013 Chain announced the East China Sea Air Identification Zone covering most of the East China Sea.

The Chinese announcement of ADIZ met with strong protest from Japan, US, South Korea and other ASEAN countries.

Even though sovereign nations are not prohibited by international law to set up ADIZs, and more than a dozen countries have done so (including Japan and the US), China’s ADIZ in the East China Sea overlaps with those of Japan and South Korea. Most alarmingly, it also covers the airspace over the disputed islands.

Beijing’s intentions are crystal clear. By setting up an overlapping ADIZ over the disputed islands, it has mounted a legal challenge to Tokyo’s claims of administrative control. Under the rules announced by Beijing, all aircraft flying through China’s ADIZ must com 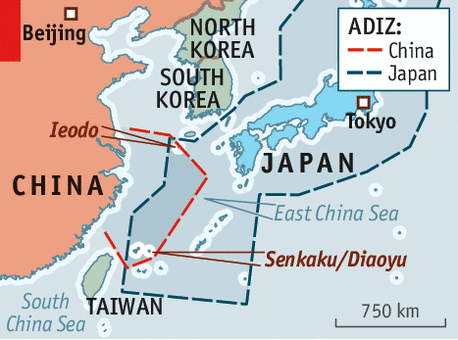 municate their flight plans and identify themselves to the Chinese military, which will enforce the ADIZ. Obviously, Beijing views compliance with these rules as recognition of China’s legal control over the airspace over the islands and, by implication, the islands themselves.

Beijing’s escalation has infuriated Tokyo, which promptly announced that it would not recognise China’s ADIZ, and instructed its civilian airlines not to comply with China’s rules.

Caught in the middle is the US, a treaty ally of Japan.

Eager to show solidarity with Japan but reluctant to allow the dispute to escalate further, Washington has opted for a middle course.

However, to avoid potential catastrophic accidents in the zone, the US government has also “advised” its civilian airlines to comply with the Chinese ADIZ.

First, Beijing’s attempts to enforce the ADIZ in future could result in accidental military clashes with Japanese and US military aircraft in the zone, thus starting a conflict no one really wants. Similar attempts could also lead to aviation disasters similar to the infamous KAL 007 incident (when a Soviet MiG shot down a South Korean jumbo jet in 1983).

Second, encouraged by this precedent, China could set up a similar ADIZ in the South China Sea, using the same tactic to assert its maritime claims.

Third, emboldened by the lack of a unified response from the international community to its unilateral move, China might be tempted to flex its muscles even more recklessly in future.

The ultimate question to ask is whether China gains or losses more in this case.

Tactically, we must concede that Beijing’s move is brilliant: it is controversial, but not illegal.

But strategically, we would find it hard to deny that Beijing has lost more.

China has lost credibility of its  claim of peaceful rise and it has also pushed Asian nations, bound by their fear of an assertive China, closer to each other and to America.

Reference : Based on editorial published in Indian Express, wikipedia