‘The police force is far from efficient, it is defective in training and organization, it is inadequately supervised, it is generally regarded as  corrupt and oppressive, and it has utterly failed to secure the confidence and cordial cooperation of the people’

Since 1902 little has changed. The Police Act of 1861 still guides and governs our police system. The colonial mindset of the police, the distrust people had for the police in British India has continued to date.

So far we have seen either bad reforms or no reforms in making the police relevant to  highly insecure India that is prone to various threats from both inside and outside its geopolitical borders.

Even after a spate of terrorist attacks on our major cities, unfolding of a series of mega-scams, and serious internal threat from Maoists, the political class is less willing to loosen its grip on the police and let it ‘serve’ the people. The efforts to beef up security apparatus, strengthen the intelligence gathering ability, bring about coherence and coordination between different police and security agencies, modernizing the police force, enabling our cities with infrastructure to deter terrorist attacks, and most importantly making police people friendly – all these necessities have been met with lackadaisical attitude of political authorities and are mired in red-tapism.

Police in India, which is under the control of ruling parties, are blind to corruption at various levels and is itself a major partner in the crime.

Commissions, Committees and the Dustbin

Police is an exclusive subject under the State List ( List II, Schedule 7 of the Indian Constitution). States can enact any law on the subject of police. But most of the states are following the archaic Indian Police Act 1861 with a few modifications. Police have become the ‘subjects’ of Parliamentarians and legislators – with a high degree of politicization and allegiance towards ruling party.

Starting from the second Police Commission in 1902 headed by A.H.L. Fraser, there have been many commissions and committees formed to look into reforming the police in India.

The 22 September, 2006 verdict of the Supreme Court in the Prakash Singh vs Union of India case was the landmark in the fight for police reforms in India. Unfortunately, even the directions of SC have not been implemented by the states.

In 2006 the SC gave 7 binding directions to the states and Union Territories. The court ordered the states and UTs to implement the directions immediately either through legislation or executive order. But, the police – politician nexus is so much deep-rooted that states are reluctant to implement any of the directions. Last year (November 2010), the SC asked for the personal presence of Chief Secretaries of 4 major states(Karnataka, WB, Maharashtra and  UP) to learn the progress and give stern directions.

On April 12, 2013, the Supreme Court again sternly asked states and the Union government to furnish before it the details of actions taken by them in establishing Security Commissions as ordered by it in its 2006 verdict.

A bench of Justices G S Singhvi and Kurian Joseph observed: “….instead of improving the police functioning and approach, what we have seen is a journey from bad to worse in these seven years,”

Instead of following SC’s ruling, the Centre called a meeting of states on April 20, and asked them to implement some of the recommendations of ARC-2.

Each MLA seeks Circle Inspector and Sub Inspectors of his choice to be posted in his constituency. The caste, allegiance, amount of bribes, attitude towards people of the MLA’s community, and ‘flexibility’ are the characters that determine posting of a policeman. At  the state level, senior Police officers are promoted to serve the ‘needs’ of the ruling party. To go ‘slow’ on certain cases, to thwart investigation, to ‘deal’ with political opponents, to ‘handle’ underworld businesses – police are needed for the politicians. 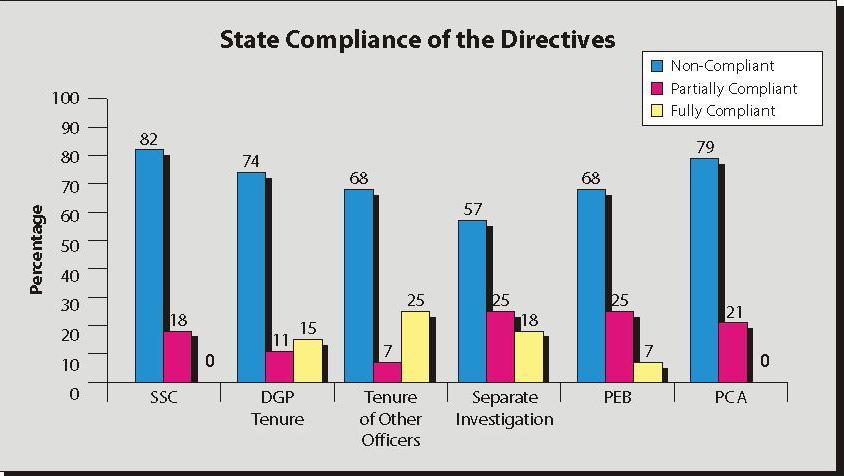 If states go to the extent of neglecting the SC directions, it speaks volumes about ‘usefulness’ of not reforming police for the politicians.

Here is an example for non-compliance with SC order. 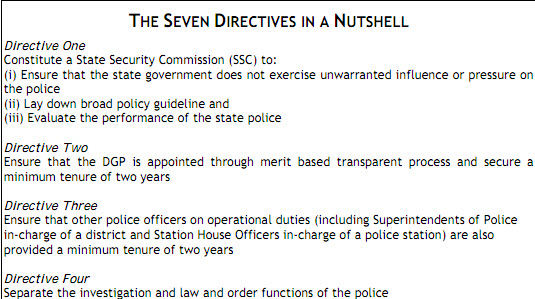 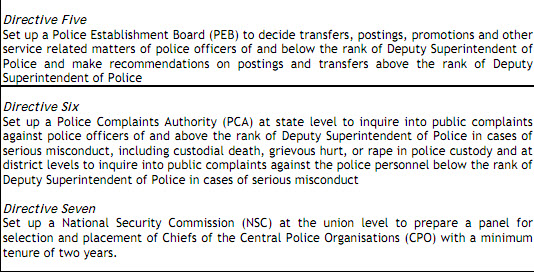 The global average ratio of police-population is 270 to 100,000, where it’s 120  in India. With far less police – ill trained, ill-equipped and most of them are posted to protect the politicians, people of India are the least secure (most vulnerable) people in the world.

If one tries to list the reforms needed, the list goes on. What we need to understand is the urgency of bringing such reforms.

As in the case of the Lokpal Bill, we need a leadership role of the civil society and constant coercion towards the states. But the difficulty lies in the fact that, it’s been impossible to persuade each state to enact a law in consonance with the SC directives. The only hope was SC, and it seems the states need another stern warning from the court – which they got and forgot.