We are living in the Asian Age. World is all praise for Asia. China and India are touted as the next superpowers. And everyone knows this story. Other Asian countries, especially Tiger economies are also not lagging behind in the race. World’s focus is on Asia now. What is that makes world take note of these countries? Remember it is because of the economic opportunities that these countries have created for themselves and for the West, is the reason they are in the limelight. No day passes without the mention of China and India in the International media.

What I am going to tell you is not the same old story of China and India, but the other story of Women of Asia who in the past and the present defined the destiny of many nations.

At present everyone’s eyes are fixed on America for all the good and the bad reasons. Bad reasons, needless to say are Mr.Bush and his miserable war in Iraq, and the sub-prime crisis. Good reason is that of the Clinton-Obama drama, because of the hope that one among them will lead the world for the best.

So what is the connection between American elections and the Asian women?

America is long perceived as the land of opportunities, land of equality and the land of multiculturalism. It also happens to be the oldest democracy in the world. But see what is happening in America; in this 2008 U. S. Presidential race, we are witnessing one of the worst form of media bias. The fight between Obama and Hillary Clinton is unconsciously revealing the worst form of discriminations both against Blacks and Women hidden deep in the minds of the Americans and the American media. If some section of the media is involved in making scathing remarks against Senator Obama regarding his religion and colour, what shocks me more is the large-scale negative campaign against Hillary Clinton from the media and some politicians of her own Democratic party and the opposition party.

Focus of my article is on Senator Hillary Clinton. Why America even after 232 years of glorious legacy of democracy, is still unable to elect a woman President? Why the American media, the most free in the world is involved in misogynist campaign against Clinton? Doesn’t its (media’s) interest in what Hillary Clinton wears, how she smiles, how thick are her ankles put them into shame? Whatever the credentials of Mrs. Clinton, one must appreciate the courage of this extraordinary woman. Running for the presidency of the world’s most powerful country is itself a Herculean task. Whatever she is facing today were not expected in country like America which takes pride in its multiculturalism and freedom rights of its citizens irrespective of caste, creed, race and sex.

Victoria Woodhull was the first woman in U.S.A. to run for the Presidential election in 1872. She did not get a single electoral vote. Her election run was nipped in the bud. At that time women in America did not have any rights to vote in the elections. It was only in 1920, after 140 years America became independent and a democracy that women got the right to vote, that too after much struggle.

This is where Asia stands out as an example to the West which preaches hypocrisy. The countries of Asia, both Muslim and non-Muslim countries have had the privilege of democratically electing women as their Presidents and Prime Ministers. Asian countries house more than the 60% of the world population. It is also home to dire poverty and pandemic diseases. Amidst all these afflictions which are the gifts of Western world, today these countries shine as illuminating examples when it comes to electing women as their heads.

In 1960, Sirimavo Bandaranaike became the world’s first elected head of a state in Sri Lanka, 14 years after Sri Lanka became independent from the British rule. She entered politics after her husband, former Prime Minister Solomon Bandaranaike was assassinated. Later in 1994, her daughter Chandrika Kumaratunga became the President of Sri Lanka and ruled until 2005. Then, in 1966, in India Indira Gandhi became first female Prime Minister of India after her father Nehru’s death. She went on to rule for 15 years. 
In Pakistan, after her father Zulfikar Ali Bhutto was hanged by the military regime of Zia Ul Haq, Benazir became Pakistan’s Prime Minister in 1988 and in 1993. Then in Bangladesh, Khaleda Zia became country’s first woman Prime Minister in 1991 and then Sheikh HasinaWajid became Prome Minister in 1996. She is also the daughter of assassinated Sheikh Mujibur Rahman, founder of Bangladesh. It is indeed extraordinary that, these two theocratic Muslim nations chose democratically women as their heads. It might be because of the dynastic rule that brought them to power, but one should remember that they were elected by the People of their male dominated countries in a free and fair elections.

Another Muslim country Indonesia too had a female head of a state. Meghawati Sukarnoputri, daughter of late Sukarno the first President of Indonesia, served as President from 2001 to 2004.

What strikes me is the fact that Indonesia, Pakistan and Bangladesh being the 4th, 6th and 7th most populated Muslim countries in the world have allowed women to become their elected Prime Ministers and Presidents. In Pakistan and Bangladesh, religion and androgen dominates the political scene. It is remarkable that people chose women as their head. It is one of the peculiar characteristic of the sub-continent that, people here worship women at the helm and at the same time exploit women in their homes.


At present Philippines and India have women as their head of the states. Gloria Macapagal Arroyo is the current president of the Philippines and she is the daughter of former president Diosdado Macapagal. In India, last year Pratibha Patel became the first female President of India. She is the only woman head of a state in all these countries whose father or husband never held any political positions in the country. 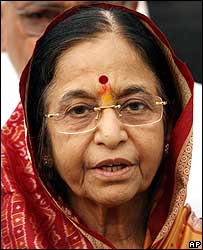 
I mentioned all these facts, just to give strength to my argument that, in the ever changing politics of the world, it is these remarkable women who shine as examples. They all may not have been successful as the heads of their countries, but they managed to change the perception that men alone can rule the nation. In Bangladesh, for example both the main national parties are headed by women.

America should have been an example in this matter. It should at once stop threatening the world with imposition of democracy everywhere, not because it is unviable, but because one should lead by example. America complains that some countries are violating human rights, women’s rights and etc., but within its boundaries today we are witnessing worst kind of discrimination of gender and race.

If Americans feel threatened by which religion does Obama belong to, I can understand their post 9/11 Islamophobia. But why does its media and some people are all against Hillary Clinton. Let her have at least a respectable exit or entry. Let her campaign the way she wants. Why bother about her dress, smile, legs, cleavage and her husband?

In Asia, people and media hardly think about personal details of their female leaders. When they go to ballots, they either think of the Party to which the candidate belongs to or the contribution of her father or husband. It is a emotional thing here that matters most. For many Indians, Sonia Gandhi’s Italy is a distant thing, what matters for them is that she is the widow of Rajiv Gandhi and she bears the surname ‘Gandhi’.

Within India too, some women have made a remarkable electoral gains and have become mass leaders partially on their own strengths. Jayalalitha in south is undisputable leader for half of the Tamil population and she also calls the shots at national level politics. Mayavathi in Uttar Pradesh last year won a election and formed the government with absolute majority. Uttar Pradesh if it would have been a country, today it would be 6th largest country in the world demographically. She aspires to become the Prime Minister if near future and in India, people do not complain about that. They welcome it when the time comes.

America might lose an opportunity to have a first woman President, but the way it treats a woman may further reduce its credibility in the world. It is time for it to take lessons and stop preaching.